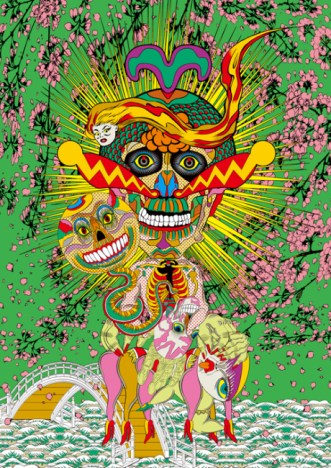 Mizuma Gallery at Gillman Barracks presents “Birth and Death Bridge”, a solo exhibition by Japanese artist Keiichi Tanaami. In this show, the artist reveals the depths of his personal universe through 12 sharp and vivid acrylic paintings.

These half-dream, half-memory visions appear in his work as grotesque, luminescent creatures, light beams, macabre monsters, naked women and fish-like beings. When he became gravely ill at the age of 45 and stood on the verge of death, his medications gave him hallucinations often featuring pine trees that since then often appear in his creations. This episode renewed Tanaami’s creative energy, exacerbating his consciousness of the fragility of life. This close encounter with death also eventually brought him to the idea of the bridge as a connection between this world and the next, but also as a metaphor for the journey of life itself as the title of this exhibition suggests.