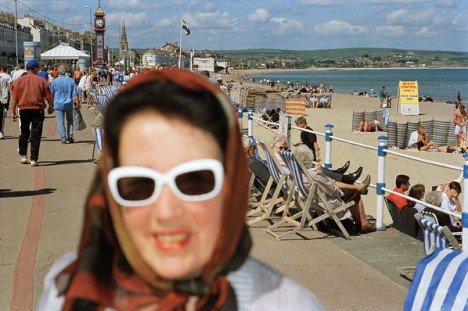 The exhibition “Souvenir” by Martin Parr will be held at Museum fur Gestaltung Zurich from July 12th, 2013 to January 5th, 2014.

With his sharp view of the world, Martin Parr is among the most important documentary photographers of our time. In his work, this British photographer shows social reality, turning the spotlight on phenomena such as consumption, tourism or national identities from an entertaining perspective that reveals the banal, the extreme, and at times also the abysmal aspects of everyday life. The winner of many awards, Martin Parr is a member of the famous photo agency Magnum, his works have been shown in numerous international exhibitions.

“Souvenir,” Parr’s first comprehensive exhibition in Switzerland, combines different aspects of his work as photographer, filmmaker and collector. In addition to photo series from the 1980s onwards, the show also includes a new work, “Think of Switzerland,” a humorous portrait of Switzerland with its special qualities and clichés. The photographs are augmented by films about and by Martin Parr, as well as a selection from his collection of strange objects – all of them souvenirs, mementoes.