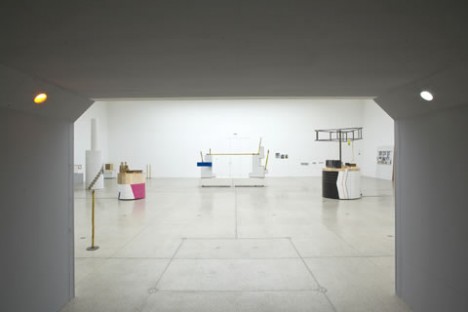 Berlin-based German artist Manfred Pernice developed the sculpturama show especially for the Hauptraum at the Secession in Wien. It is showing until February 13th.

His sculptural works are built or assembled out of simple, sometime painted or sprayed materials including cardboard, chipboard, concrete, and metal, supplemented with text, maps or photographs. Starting from his observations of the urban environment, he highlights its failings and subjects the ordering system of modernity to a fundamental critique. His works set up an interplay between autonomous form and an installation-based, narrative and site-specific character. They deal with good and bad form, with perfection and imprecision, realism and abstraction.