The theatre performance is a modern adaptation of an ancient myth about the Gods of Mount Olympus, in which the main characters, Zeus (the Greek god) and Hera (the Greek goddess), try to recover the box of hope that Pandora removed. The performance progresses as the live actors interact with the avatars they play in Virtual Reality. 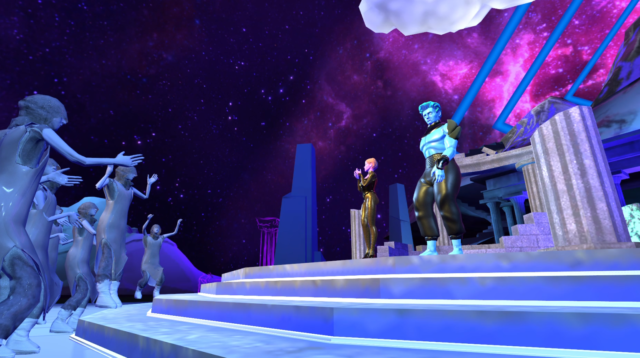 The first stage that appears after passing through the ringed entrance is a plaza-like area. From there, you can take an elevator to a lower level, where you’ll find an underground city of sorts. Then, while exploring the interior of the city and going through a tunnel-like space to find the “Hope Chest,” you will reach a stage with a temple-like structure. At the end of the game, we had the impressive experience of flying through the air (probably due to the controlled gravity setting). There was also a bar here, where the actors and visitors could communicate with each other after the performance.

This performance programmed for 1 hour is attracting attention as a new form of entertainment, such as premiering at the Venice Biennale 2020 and winning the Venice Virtual Reality Expanded 2020 – Best VR Immersive User Experience. It is still held irregularly, so if you are interested, please check their website.