On 16th May 2004, 23 Vienna households (one household per municipal district) saw musical performances by internationally renowned artists embodying different musical orientations such as electronic music, rock, hip-hop, jazz, experimental music, classical music and even non-European musical traditions. But the best is yet to come: MP3 streaming was used to “network” the individual performances into a “virtual ensemble”. Online audiences were invited to travel through virtual Vienna with stopovers in the individual concert venues. In the evening of the 16th, the members of the “virtual ensemble” met for a “best off” live session in the Vienna Ronacher theatre. 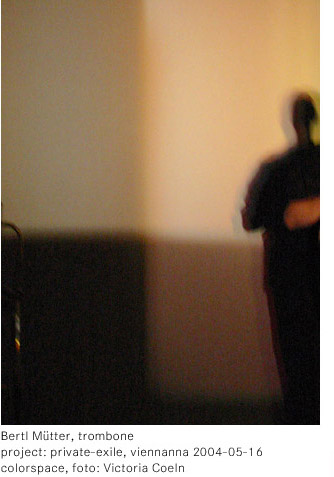 Rupert Huber, an Austrian composer and pianist who is well-known for his collaboration with Richard Dorfmeister (Tosca), was commissioned by Wiener Festwochen to conceive and realise Private Exile in the framework of the city’s annual festival of culture and music. 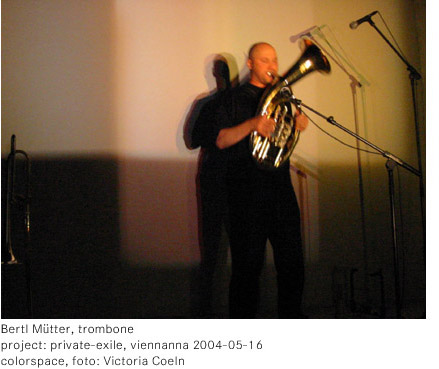 In the 19th district of Vienna, Bertl Muetter improvised in Victoria Coeln’s Colour Space. The musician was born in 1965 in Steyr, Upper Austria. Upon completion of his musical studies in 1990 in Graz (Jazz Trombone and Voice Training) Muetter has indulged in composition, trombone, voice, euphonium, and improvisation around the world. “I was fascinated by the idea of private exile”, says Muetter. “What would that be like to play together with others in virtual space? What would the others do? I am very much inclined to span this thought even further and ask what would happen if the whole world was “streamed”, humming?” 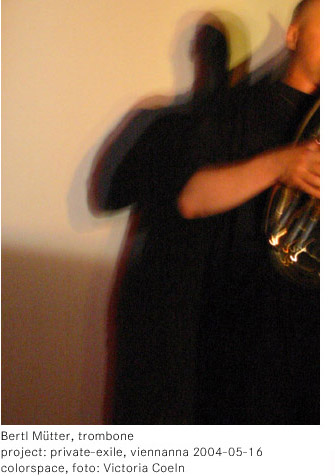 The improvisation in Victoria Coeln’s colour space took place in a very relaxed Sunday afternoon atmosphere. “The evening performance in the Ronacher was a completely different experience”, admits Muetter, who considers private exile a brilliant experiment. “In my imagination I love to paint the picture of Austrian musicians performing in Japanese households or art galleries, the performance being transmitted online together with scenes of wonderful places in Japan… and vice versa…”