From the interrupted dream of Chen Zhen to the two souls of Yinka Shonibare. At the Pavilion of Contemporary Art of Milan, under the direction of Jean-Hubert Martin continues this personal exhibition dedicated to this Nigerian/British artist, which will be open to the public until 14th September 2003.

Shonibare addresses the issues of cultural identity in his artistic research with irony: from the dandy with black skin to astronauts and aliens dressed in typical African colours and materials. He seeks provocative and destabilising elements that stimulate reflection on the perspective in which the world is usually considered. Two extremely different souls, the profoundly African and the Anglo-Saxon, western, souls, are found incessantly side by side in his work. 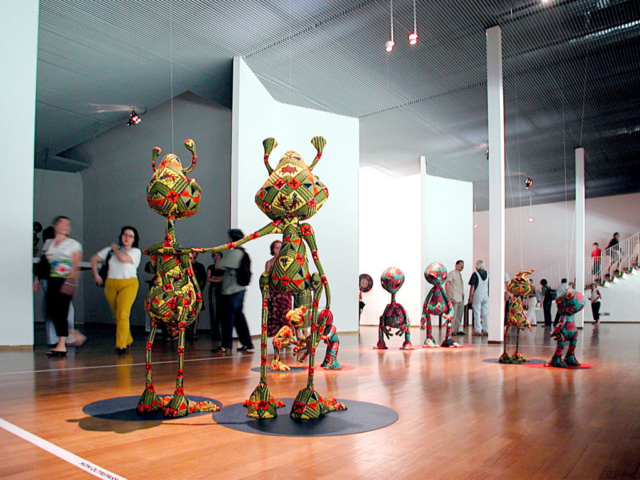 His subjects, often look at the world of fashion, always an expression of class and power, as a field of investigation to observe the contamination between European culture and elements of African cultural tradition. Shonibare puts them in his works ironically as instruments of political criticism by dressing his sculptures in them. In other works, using the photographic medium, Shonibare places himself at the centre of the images either dressed as Oscar Wilde’s Dorian Gray or for example in a series based on A Rake’s Progress by William Hogarth.

The Italian edition of the exhibition, presented at the PAC Pavilion of Contemporary Art of Milan, consists of 18 works including large installations, sculptures and photographs produced between 1994 and 2001. The works are from the Israel Museum of Jerusalem, the Stephen Friedman Gallery of London and from private collections and European and American museums such as the Tate Gallery of London and the MCA of Chicago. His last Italian appearance was in December 2001 at the Hendrik C. Andersen Museum in Rome.