To be recognized as an artist, it is important for them to show their works not limited to this fair and will continue to participate in the same exhibition — this applies to other art events too. One of the privileges as a jury is to see some old faces: such as Naoko Murata and Toshikazu Hori, who also exhibited last year; Tomoya Terada, who first appeared in 2016, was back this year; and Yasushi Hori, who has previously been featured in this magazine. It was great to see his actual works in person too. 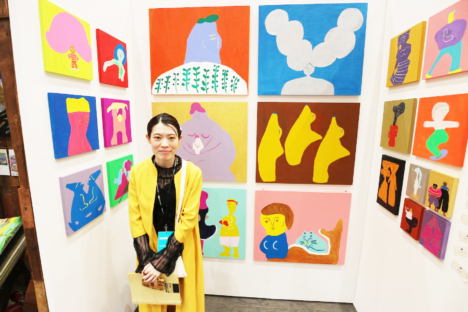 Taeko Ueda is an Osaka-born artist whose artworks’ motif has always been about people. She exhibited a series of paintings that were inspired by a combination of colored pieces of torn paper. As she tears apart paper herself, she never knows what the output would look like until she actually makes it. Her works remind us how fun it was to be imaginative and creative as a child. 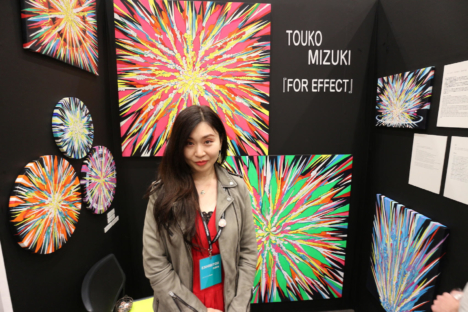 Touko Mizuki is a painter who goes back and forth between Yokohama and Paris. Her theme has always been nature and flowers, but she felt that it was too feminine and biased. That made her decide to create a new style that challenges the status quo. The disruptive energy that frees the gender bias gives such energy to her works.

Unknown Asia has been growing for years and years, with the message “From Osaka to Asia, From Asia to Osaka.” This year was exceptional — it has reached the largest number of exhibitors and visitors. We are excited to see how all the juries, reviewers, sponsors, and creators will be producing new works in Asia soon. SHIFT, as a magazine, will keep an eye on these six artists, of course, also all the creators who exhibited at Unknown Asia this year.