For the main part of this festival is performing arts, as the name suggests, venues host wide range of contents, including experiential events and exhibits that the audiences can actually touch and experience from morning until night every day.

Among them, I focused on the contemporary dance on the final day. The program “E T H E R E A L” is a collaborated production of male and female artists, Emmanouela Dolianiti from Greece and Yuya Fujinami from Japan. Emmanouela is a female dancer who attended the National Dance School in Athens while studying philosophy, education and psychology as a student. She specializes in lyrics, live music and films. Fujinami was born in Japan, studied dance and gymnastics. After graduating from a German ballet school founded by choreographer John Neumeyer, he has been performing under numerous choreographers, both domestically and internationally. 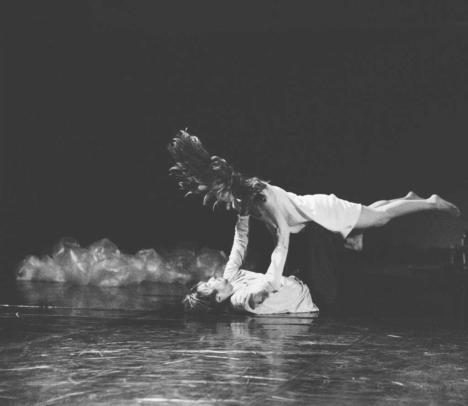 I have seen contemporary dance in the movie “Pina Bausch” or, more recently, “Suspiria (Revival version)”, but since I have never seen the real performance in person, I was quite nervous about my first experience. The most impressive thing was that a scene which a human-looking beast suddenly started to sing a song “Sweet Dreams” by a British male and female unit, Eurythmics, from a scene that expresses the feelings of anxiety and fear that he feels right before going to bed.

“I travel the world And the seven seas, Everybody’s looking for something.” According to the lyrics, the scene seemed to be drawn into the deep dream from the real world. In a space with a capacity of around 100 people, the distance between the two dancers and the audiences is like that you can feel a real breath. Fortunately, I was able to sit in the front row in the middle of the middle section, and I felt a sense of energy like cutting the air of those two dancers, and my heart was constantly pounding.

There was no constant tension throughout the performance, and there were even comical scenes that included their own humor in places. Also, the audiences were allowed to laugh and express their emotions freely. Especially, music that adds color to performance creates a dramaturgy space. It was a truly unique experience that only the audiences and performers in that environment can feel. Attending the contemporary dance performance for the first time, I may have gotten better at looking at human behavior more than before.

Although there are many parts of performing arts that I cannot make comments, I felt that, with no doubt, there are a number of theaters that are the source of experimental, innovative and international artists came out through PAF, and those artists are expanding their independent activities from Berlin.
I would like to continue to pursue performing arts that will be transmitted from Berlin to the world.