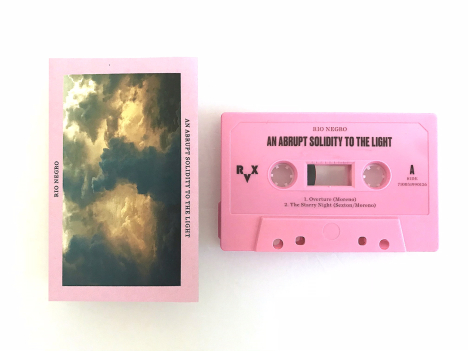 Rio Negro is the brainchild of Victor Moreno, a Spanish-born Swedish artist who is active internationally and has spent about a third of his life in Sweden. Rio Negro, which is Spanish for “Black River,” was conceived as an artist collective to explore the blurred boundaries between poetry, electroacoustic music and visual art. Moreno embarked on the project alone, recording at the renowned Elektronmusikstudion (EMS) in Stockholm and later releasing his debut EP “An Abrupt Solidity to The Light” digitally, which is distributed in a cassette format in 2018.

“To release “An Abrupt Solidity to The Light” EP in cassette format is for the sake of making it a physical thing. To me, it’s a tangible piece of art. Not because of the music itself [laughs]. I see it as an object and a piece of art: Wolfgang Tillmans’ cover, the poetry, the format, the analog sound. I find it like a little cute thing. Analog HD is the next big thing in sound,” Moreno explains.

From its solitary beginnings, the project gained momentum, attracting the interest and support of a host of well-known international artists. Currently, collaboration partners include: German photographer Wolfgang Tillmans, whose image appears on the cover of the EP; music producer and FX guitar pedal maker Oliver Ackermann from the New York punk band A Place to Bury Strangers and founder of Death by Audio; Johannes Buff, who works with Thurston Moore and Lee Ranaldo from Sonic Youth; and Swedish producer Björn Hansell who has teamed up with Fever Ray, among some other bands.

Moreno concludes, “I first presented the EP in a solo show at Kafé 44 in Stockholm, a classic punk venue. In the meantime, I’ve been re-working and tweaking the compositions for the new show. I had time to arrange all the tracks recorded originally for the EP. Actually, I’m really happy I did that part alone. You have to start from somewhere, but it’s all different now – you can listen to the tracks of the EP, but the project has evolved – the tracks have changed, it’s a brand-new experience. I want people to read this and spark their curiosity to come see this art installation and perform live.”

You can buy the cassette online here.