Calligrapher / Artist working in California, Aoi Yamaguchi had a solo exhibition “In-Ei: The Resonance of Shadows” at Cross Hotel Sapporo in Hokkaido, her hometown, till April 30th. She firstly meditates before facing the paper and sets her mind as flower or ocean to write the letter “flower” or “ocean”. She gazes her inside deeply and also goes to all over the world as a bridge of different cultures. Her “calligraphy” is a new way to tell the traditional culture.

Looking at the theme, “In-Ei (shadow)” from 3 points and she wrote poem. Those images were presented by the installation of modern creative calligraphy. She had live performances at 2 different places prior to this solo exhibition. These works tell us various “In-Ei” which she expresses over the flat surface. 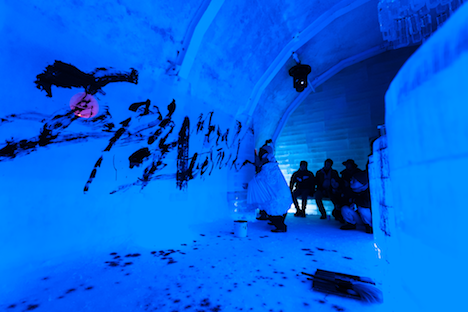 The 1st live performance was held at the Ice Hills Hotel in Tobetsu 2016 in the last part of the one night only party: Cross Generation Vol.19, 2 days before the exhibition. This hotel appears only in winter at the suburban of Sapporo.

She collaborated with a sound artist Corey Fuller who is from Seattle and lives in Tokyo. Aoi Yamaguchi says “I can feel Inei (shadow) in his music”. Once his sound echoed in the cold clear air people became quiet. Very thin cloth as if the ice wall was transparently seen was spread. 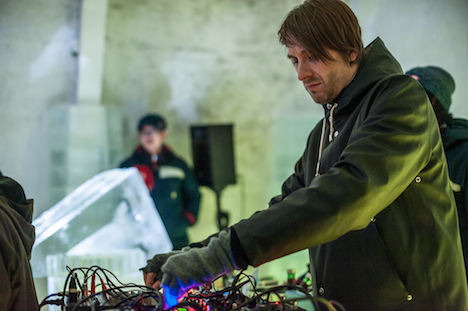 Yamaguchi’s mysterious action like formal bow and meditation, which were dyed in her body, echoed with Fuller’s deep music together inside the ice wall. It created some blank space like white paper in the air, time, and people’s mind. 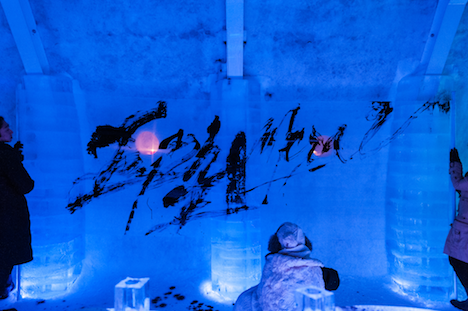 The ink black shadow was spread. The letters written with full of spirit were “Ephemeral + Eternal” in English. Her breath was rough right after the writing. As the same winter never comes after this snow and ice are melted, we can never see the same performance. However it will be shared and last as a special memory among the audience. This performance made us intuitively feel “The Resonance of Shadows”, the subtitle of the exhibition.