Masak Masak – literally meaning cooking in Malay, but affectionately referred to as the game of make-believe cooking. Childhood and simpler times come to mind when one says Masak Masak. In this day and age of tablets, television programs and online games, the National Museum of Singapore brings these simpler elements of play and fun to our technology savvy children this school holiday. 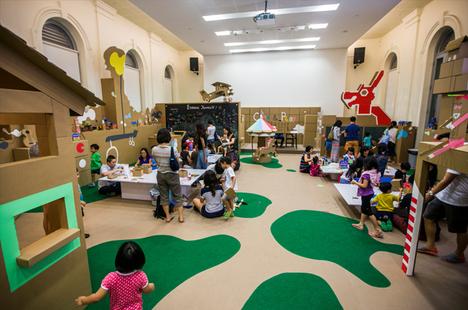 Moments of reality are suspended in Justin Lee’s “Come and Play.” A mega installation made completely out of cardboard, children are invited to create their ideal world. A child’s imagination is limitless. A carton box could be a house, a shop, a vending machine. It is with this spirit that Lee creates a landscape of different forms and scenarios. Cardboard ships and planes, forests and homes. Children interact with the space and other children to kindle that sense of imagination (sans the iPads). 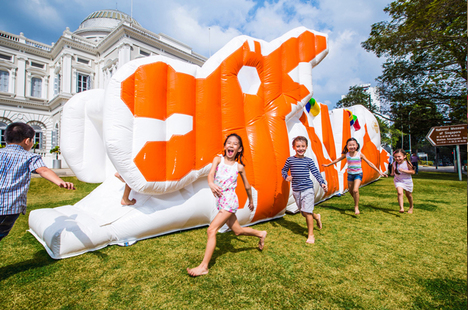 Reminiscing the old playgrounds of Singapore with their iconic animals of elephants and dragons, Singapore Bouncy Playgrounds pay tribute to the quintessential 1980s childhood by recreating those moments (sans the sand box) with inflatable cousins placed on the lawn fronting the National Museum. Think bouncy castles and squeals of delight in bright vivid colours! 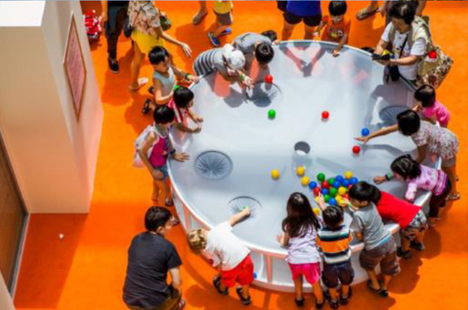 School Of The Arts (SOTA) students brought the humble marble back into the forefront. With a contemporary twist unlike an online game, the goal is simple, to get as many marbles in the center, but one has to avoid the obstacles placed along the way. This game however requests more effort than its digital counterpart. Instead of a swipe of a finger, physical accuracy, strength and skill are all required. 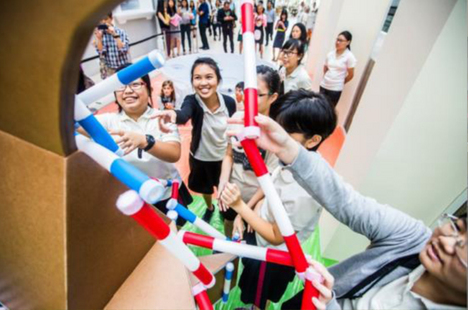 The humble game of pick-up sticks

The humble game of pick-up sticks is reinterpreted by SOTA students where instead of picking up sticks without moving the other pieces, one is invited to build towers and create different structures in the shortest time. Alternatively you could remove pieces of the tower without it collapsing. Think Jenga but with sticks instead of blocks.

Special outdoor film screenings under the Byan tree in the Stamford Gardens, pop-up ice cream stall and workshops bring play closer to children or the children in us. One is never too old to play Masak Masak.