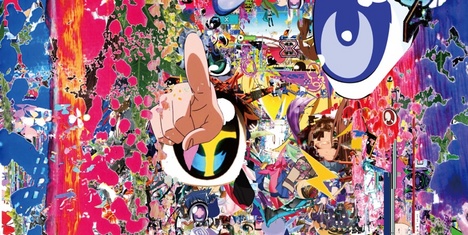 The “Extreme AR Image Core” exhibit is currently being held at Diesel Art Gallery in Shibuya, Tokyo by up and coming artist Kazuki Umezawa. He has been creating many unexpected new works by combining a vast number of motifs that he creates with countless pictures culled from the internet.

Umezawa introduced many of his new art works at this exhibit as well as inviting the AR3Bros. as a development team who do creative activities using a technology called “augmented reality” (AR). His pieces with AR embedded inside are expressed as three-dimensional pieces that can be appreciated when viewed through terminals at the venue that have been prepared and re-configured in their monitors. In conjunction with the exhibit, an interview was conducted with Kazuki Umezawa about his past activities and future developments. 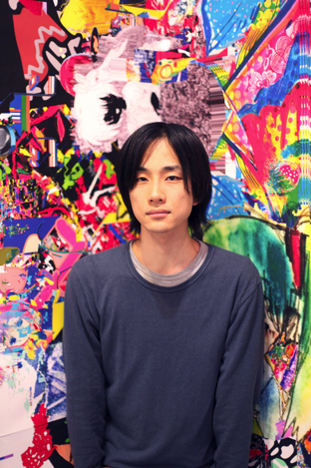 First of all, please tell us about the circumstances under which you decided to do this “Extreme AR Image Core” exhibit at the Diesel Art Gallery and/or the points that you were focused on for this exhibit.

I did a presentation to Diesel about my past works and activities, as well as pieces that I wanted to create with the AR3Bros. As a result, I was accepted and managed to do a solo show there.

Since I was able to do a show with the fashion brand, Diesel, I was aware that my audience would be different than usual. Therefore, I explored the parts where two perspectives, fashion and art, blend the most and worked on the exhibit. 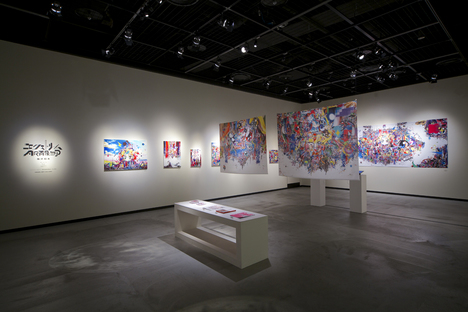 Can you tell us what the meaning is behind the exhibit’s title, “Extreme AR Image Core?”

The phrase “Image Core” is one of the elements of the title for my exhibit that I have been using since my first exhibit. There is no solid meaning behind the phrase, but the word ‘image’ is essential to me since my work contains so many elements of digital collage. I understand that the word has a sound which reaches to the various concepts related to art, such as images inside of a brain, ideas and paintings. While the word “core” means a nucleus and/or the center, I personally use it for my exhibit titles to imply the playful genres of music games. I like the idea of modern freedom that the word carries to make anything established by adding “core” such as, “hardcore techno,” “Renaissance core” and “Princess core.”

I decided to add the word “AR” in addition to “core” since the majority of my work in this exhibit includes AR. I was fine with the name “AR Image Core,” but I also added “extreme” in momentum since the world of music games that I like reminds me of the weird radicalness of extreme sports. 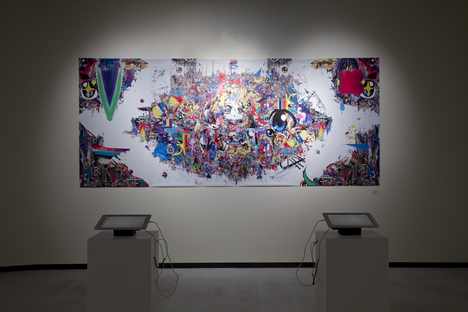 How did this collaboration with the AR3Bros. come about?

When I went to Minamisouma for an interview about Hiroki Azuma’s Fukushima Daiichi nuclear power plant tourist plans, I met Mr. Kawada who is the oldest of the AR3Bros. There, we talked about collaborating on our work. Then, we spoke on a TV show on 2.5D, a social TV station. After that, I came up with the idea of creating art work using AR with AR3Bros. while I was preparing the presentation for my solo exhibit at Diesel. This is how this exhibit began. By meeting over and over, we accomplished these works to express to our audience through AR the complicated layers of structures and patterns in my work. 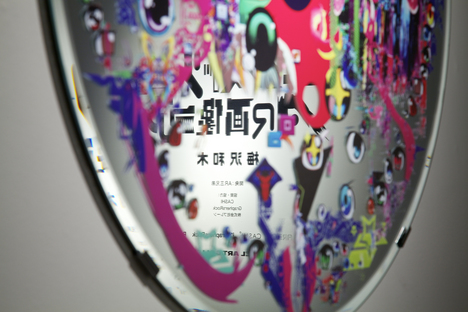 I finally got to see your work in person and had a very strong impression about the way you use vivid colors. Is there anything that you are careful about when you create one piece by layering various colors?

The colors on my art are always referenced by the transparent RGB colors that a monitor emits. Paints and visuals have different kind of colors. This is a complicated relationship which isn’t simply separated by analog and digital. The colors of paints are different from monitors, but I could structure my art while I am conscious of the color of monitors. When I work on my art, I follow the feeling of fragile colors that can only appear on a monitor. To be more specific, the majority of the colors are referenced by the bright eyes and hair of animation and game characters whose lively expressions appear on a monitor. 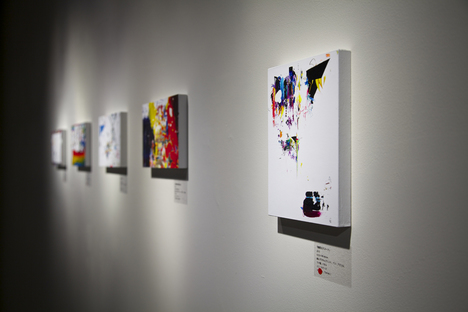 What’s the process for creating your work? How long does it usually take for you to complete one piece?

It’s never been the same way. I recently feel like figuring out the patterns for three hours, three days and three months duration. When the accumulation of images in my brain and data in my hard drive emerges very conveniently, and the combo heads out to the completed image extremely quick, I could do the work in three hours. When I need to create a completed figure by repeatedly disassembling and reconstructing the accumulation in my brain and hard drive, it usually takes three days. When I really squeeze my brain and still have to break the premise and reconstruct it, it takes three months. I once made a piece for a group exhibit called “Reality!” in the past. This took me three months to complete. I haven’t yet had the feeling that I would need to spend three years to complete one piece. 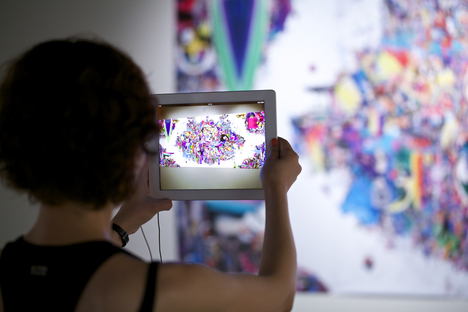 Do you think the influence of so-called geek culture in your work has changed since your early works?

I believe that I get influenced each time in the same way that the geek culture constantly updates the content and changes. Since the earthquake, I became aware of the three-dimensional element and social factors in addition to geek culture. In that sense, I think my work has changed. 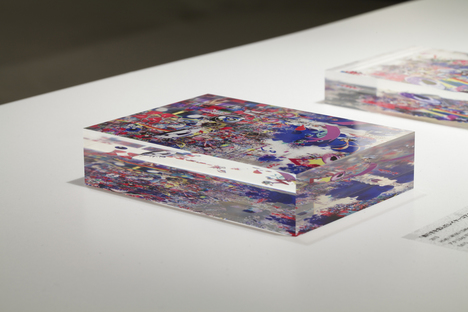 Have you recently found anything particularly interesting or are you still checking?

It’s actually only been for five years, but I always play beatmaniaⅡDX to train my extreme brain image information processing skill. I recently reached the Kaiden level, so I’m aiming to get to the Zenpaku level.

Also, just in general, I try to check out the things that are popular, such as “Kantai Collection,” “Attack on Titan,” “No Matter How I Look at It, It’s You Guy’s Fault I’m Not Popular! aka Watamote” and “Danganronpa.” I have been checking “Attack on Titan” and “Watamote” since the first issues came out, but I am still catching up with the rest. Also, I read “Weekly Jump” every week. 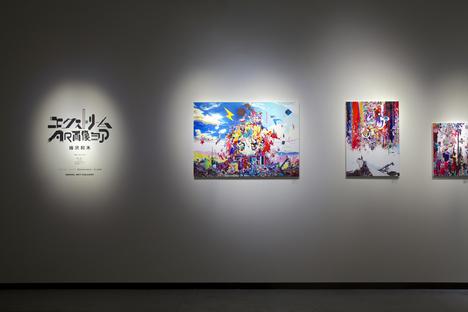 Have you noticed any changes in your attitude as more and more people look at your artwork?

I started to think more about public nature. Every time when I do an exhibit at an art museum, I come to the realization that my work is being marketed to a nerdcore group or as something that people want to keep a certain distance from, even in the same group as contemporary art.

It sounds like a design talk to create texts and/or marks easier for people to understand, but my work is no such thing anyway. But I often wonder what to do to keep an edge while also having a public nature, as much as I think of Taro Okamoto using the era’s most advanced technology, TV, as media at that time. 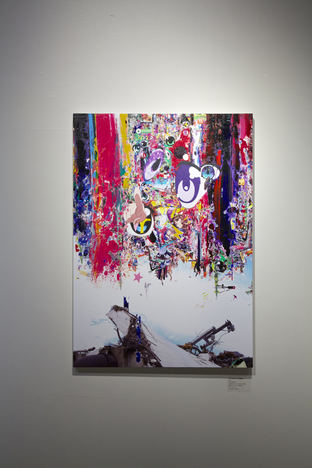 Do you have anyone in your mind with whom you would like to collaborate or exhibit together?

I have been talking to Hiroyuki Nisougi about doing something together. But, since we haven’t been able to do anything yet, we will probably collaborate soon.

As an individual or an artist, is there anything that you want to keep challenging?

In general, I’m working as an artist to follow the desire see images that I have never seen. It would be best if an image that I’ve never seen is also new to other people. I want to make art like that.

While the primary purpose of an artist is to expand one’s artistic activities by becoming famous at home and abroad, I personally focus on sublimating works reflecting my desires. I want to keep challenging myself without abandoning my individuality. Currently, I’m working on a piece that pushes out a mass information perspective while intentionally hiding themes like sex and gender. This has to do with my, Kazuki Umezawa’s own desires. Perhaps, there might be some new developments when my desires are released, but I’m not sure yet. If I were to challenge myself, it would be something like that.