Le Fresnoy has gained a worldwide reputation for the high level of its school, and for the innovative exhibitions and experiments led by the students and the invited artists-teachers. The new exhibition, Walden Memories, remains truthful to that spirit, bringing a classic of American literature into a new life in the age of technology. 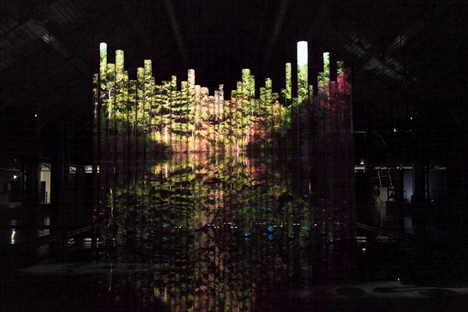 the poles displaying a picture of the pond, reflected on the water

Jean-François Peyret, the conceptor of the exhibition, likes to create dialogues between sound, theater, science, technique and thought. Litterature also plays an important role in his work, as with this exhibition, based on Henry-David Thoreau’s classic, Walden, that has been haunting the Peyret for years. Since its publishing, Walden has been a cult book, influencing such personalities as Gandhi or the Beat Generation. Many even consider Thoreau has a father of ecology and degrowth, even if that is not what interested Peyret. In fact, Peyret confesses not particularly being a nature lover, neither an apostle of ecology, and cannot really explain the attraction of Thoreau’s text on him, except may be for the high literary quality of the text in itself. 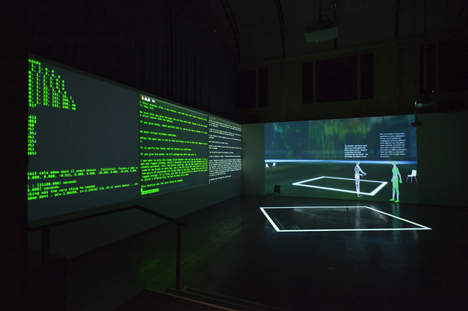 While he was an invited artist-teacher at Le Fresnoy in 2010, Jean-François Peyret, had made a direct reference to Thoreau’s book, which had impressed him a lot, creating a cabin that was a replica of Thoreau’s at Walden pond. The cabin then appeared as an observatory of man’s relationship to technique. Today, in 2013, the cabin as been contextualised in its relation to nature and to the forest of Walden. The director has gathered around him several accomplices, Pierre Nouvel (video artist and scenographer), Alexandros Markeas (composer), Thierry Coduys (“technical magician”), Agnès Cayeux (writer), to make the cabin “very talkative”. They imagined an impressive installation, developing in the very large spaces of Le Fresnoy, giving new dimensions to the words, that spread everywhere, on the walls, the ceilings, and can be heard told by comedians and by the electronic avatars of these comedians. The text therefore begins the base of an interrogation about words and memory, the encounter of the actor’s voice with a duplication of their voice. The exhibition is also an experiment on translation, as a wall presents a permanent automatic translation of the text, using the latest and most efficient softwares. 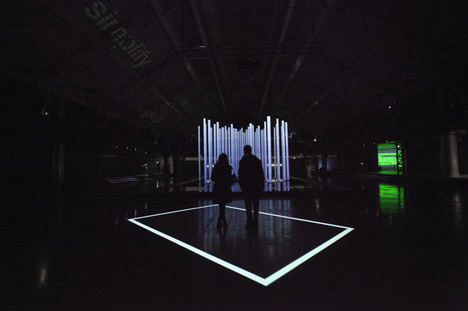 a general view with the poles in the background

The words also morph into trees, with luminous poles displaying extracts from the text on one side, and fragments of photos of Walden pond on the other side. The visitor must stand in one precise point to allow the eyes to reconstruct the whole vision of Walden Pond formed by the poles. The image of the pond reflected on the surface of a small pool of water creates a striking sensation, merging two worlds in one, giving the viewer the feeling that he has crossed the mirror and stepped into another world. 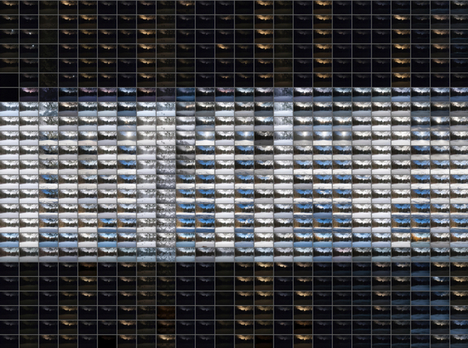 the pictures taken during one year at Walden pond

Walden pond is really omnipresent in the exhibition, photographed several times, everyday, for a year, from the same exact place. All the images are displayed on a wall, offering a beautiful metaphor of the impermanence of the world and the passage of time. The creators of the exhibition also succeeded in creating one unique image by juxtaposing of all the photographs taken. Walden pond seems then frozen into eternity, while at the same time vibrating with the internal life of the never-ending cycle of nature and the slight changes between each superimposed image. The visitors are invited to pause in front of this picture, to relax in an old fashion rocking-chair and immerse themselves in the contemplation of the picture, in a silence only punctuated by the sound of a chime. 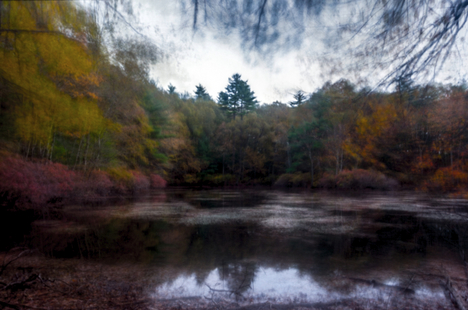 the unique picture obtained from the superposition of all the pictures

The exhibition in its whole is highly contemplative, a sensation accentuated by the deliberate darkness. It takes a short time for the eyes to get used to it, but then the visitor gets wrapped in the peacefulness of the dark, from which only emerge the sounds and images inspired by Walden, as if they came back from the far depths of our memories. And no doubt Thoreau’s ghost is sometimes silently visiting the place, enjoying one again the peace of his beloved pond and forest.