What kind of scenery would you imagine from these two words?

It is the title of the first solo exhibition in Japan by Lee Mingwei, a Taiwanese artist currently based in New York, expressing the feeling of drifting air that can be felt from his works. At age of 13, he moved to the U.S. and studied textiles and sculpture. Lee became an internationally acclaimed artist, participating in exhibitions such as the 3rd Asia Pacific Triennial (1999), a solo exhibition in the Museum of Modern Art (2003) and the 50th Venice Biennale (2003). This exhibition, hosted in the Shiseido Gallery in Ginza, introduces ‘Fabric of Memory’, ‘100 Days with Lily’ and ‘The Letter Writing Project’, his three major works. 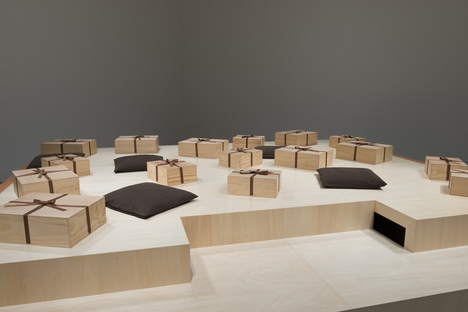 The first work you will see, entering the exhibition space is the ‘Fabric of Memory’. A unique characteristic of this work, which was first exhibited in Liverpool Biennale in 2006, and claiming international success afterwards, is the fact that the exhibited works are contributions from the public. “Please show us the precious and handmade textiles that you sleep with in your home.” – Selected stories such as ‘who made the fabric and when?’ and ‘how it has been used?’ are introduced along with the textile, presented in a specially made wooden box. The collection of the textiles is often carried out in the local area, where the exhibition takes place, reflecting the culture, region and history of the hosting countries. For this exhibition, the 16 contributions included mainly kimono along with other items such as a coat, brooch, kilts, and stuffed animals. The contributions varied from textiles that survived large catastrophes such as the Second World War and the Great East Japan Earthquake to a proudly contributed smock-frock, with an embroidered patch sewn by the young owner’s father. Every textile is carefully crafted stitch by stitch with the wish of being healthy and the owner’s prosperous future. The exhibited textiles are politely presented one by one in a wooden box and placed on a large wooden platform situated in the center of the exhibition space. The visitors take off their shoes to get on to the platform, carefully untie the ribbon of the wooden box, open the lid and view the works in comparison to its stories that are printed on the back of the lid, unraveling the history and the emotional memories of each textile. 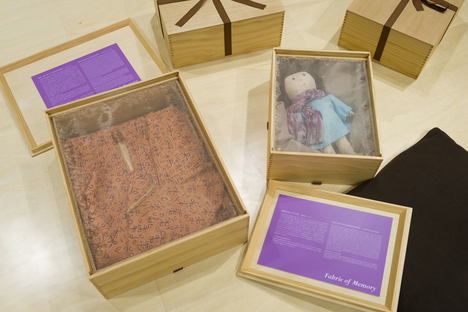 Lee’s works are often inspired by his own personal experience. The inspiration for ‘Fabric of Memory’ also came from his childhood. On his entrance day to the kindergarten, when he was nervous to be separated from his mother, he was given great courage from his mother pointing to his jacket and saying, ‘think of this jacket as a substitute to your mother. Then, you will feel that your mother is beside you all day.” (Lee’s mother handcrafted all the clothes that he was wearing.) The various items from this exhibition are also those that gave courage and encouragement to the receiver of the textiles. The stories behind are usually shared between people who are close to each other. However, by reaching out to common memories through the forms of exhibited artworks, the visitors also feel various emotions. 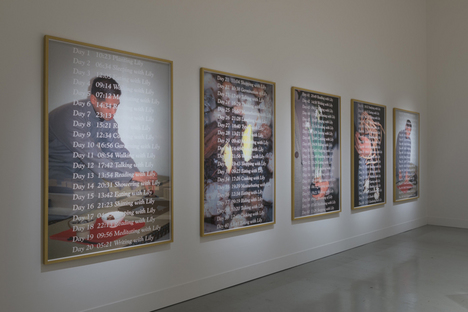 His second exhibited work, ‘100 Days with Lily’ is a documented project for mourning the death of his beloved grandmother. As Lee, who was abroad could not directly care for her, he has thought of his own way of the farewell ritual. The work introduces five photos with short texts that depict Lee’s 100 days with his planted pot, as his grandmother was very fond of gardening—sprouting, blooming flowers, which decay, and eventually wither and die. By depicting his daily life with the lily, Lee is possibly tracing back the time he spent with his grandmother.

On the 79th day, the lily dies. The project itself was however continued with his will. The project ends on 100th day with condolence by the ‘Exhumation of Lily’. Both the Lily and his grandmother had died biologically at some point, but inside of Lee, their lives have yet to end. This work realistically demonstrates the perception of the artist towards time and life. An artwork that has evolved this concept into a participative piece is ‘The Letter Writing Project’. 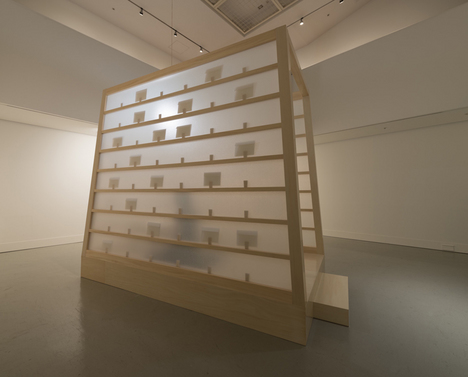 ‘The Letter Writing Project’ is based on the artist’s own experience of writing letters to his grandmother for one and half years after her death. Inside a shoji-like booth, consists of a Japanese style-writing table with a pen, letter pad and envelopes, which visitors can use to freely write letters. There is no arrangement on who the visitors will write to or the content of the letters. The finished letters are placed on the designated space inside the booth, if preferred. If the visitor does not wish to share the letter, it is then sealed inside an envelope. As long as the envelope has an address on it, the gallery will send the letter to the designated address. The remaining letters with no address on it are placed inside the booth, and collected by Lee himself after the exhibition and burnt. The thoughts that are not possible to mail are sent out to the receivers in smoke.

The memorable treasures from one’s childhood, an eternal farewell to the beloved ones and feelings that are deeply inside one’s heart—thoughts that everyone has and often hides are turned into works of art. By doing this, Lee has induced close relationship between the works and the viewers. Clearing your heart and listening to the voices from the works might trigger your own personal stories from inside. That might be old memories or events that are currently happening in your life. Although it may be unclear, it is certainly an emotion that exists, and worthwhile for you to post as a letter in the venue.