Concrete studies, when thoroughly investigated, hint at the possibilities beyond the the fences of genre. The exhibit “STUDIO MUMBAI: PRAXIS” held at the TOTO GALLERY・MA is the first solo exhibit in Japan by a spirited architecture group that has received the special commendation at the 12th Venice Biennale International Architecture exhibit in 2010, and who also participated in the “Architectural Environments for Tomorrow – New Spatial Practices in Architecture and Art exhibit” at the Museum of Contemporary Art Tokyo in 2011. Since Studio Mumbai currently has a project underway at the National Museum of Modern Art Tokyo along with the exhibit at TOTO GALLERY・MA, this is the perfect opportunity to know about their activities which comprehensively approach not only architecture, but are also rooted in culture and tradition. 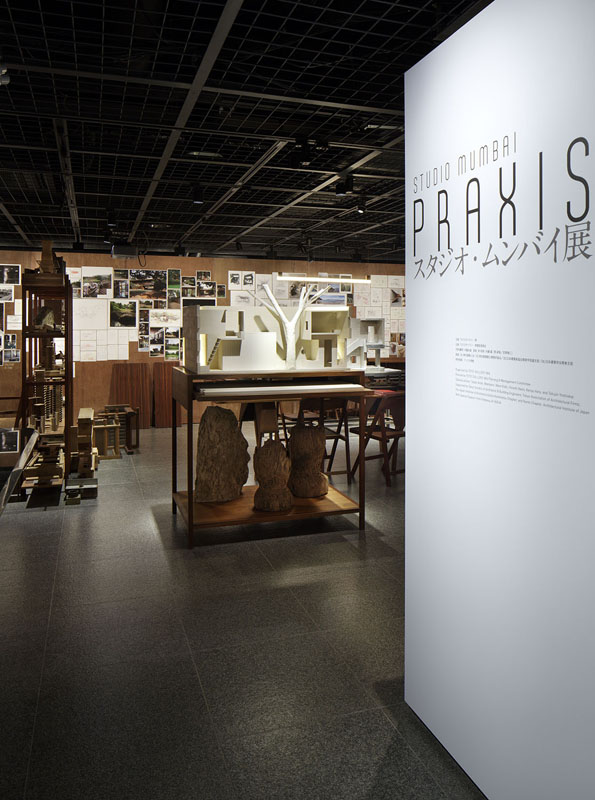 Studio Mumbai was established in 1995 by prominent Indian architect Bijoy Jain. While different organizations are mainly tasked with design and construction in the architecture industry, under a personal network of expert craftsmen and architects Studio Mumbai oversees the clearing of the construction site, the design, and the construction by hand of a project. Approximately 120 capable craftsmen, including carpenters, masons, and smiths from different parts of India live and work in offices in and around Mumbai. Mr. Jain’s own philosophical contemplations are combined with experiences from India, the USA, and the UK, then added to the knowledge of craftsmen skilled in traditional techniques, it creates spaces with modern nuance which still overflow with profound nostalgia and deep emotion. Their initiative is rich with potential that can’t simply be bound with words like “ecological” and “sustainable.”

This so-called construction process overflowing with deep emotion is quite different from the procedure one might usually imagine. The organizer, Mr. Jain, described it as follows:

“All encompassing, the practice of the architect, whether tangible, ambiguous or theoretical, is primarily concerned with the nature of being. This ontological understanding in ‘PRAXIS’ may begin to express how the work at Studio Mumbai is created from an iterative process, where ideas are explored through the production of large-scale mock-ups, material studies, sketches and drawings to form an intrinsic part of our thought and body.” *2 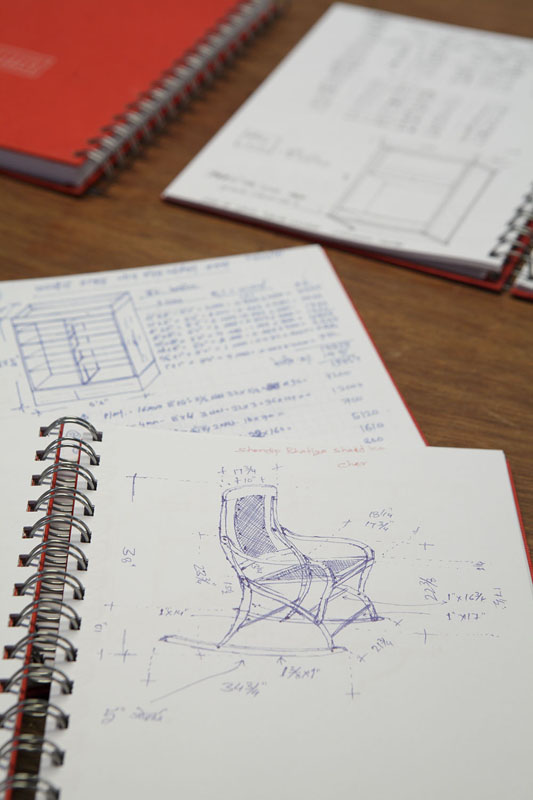 © Nacása & Partners Inc. The sketchbook with a red cloth cover is the one that craftsmen carry everyday. Various calculations and designs are written on it.

“PRAXIS,” the title of the exhibit, indicates humanity’s approach to nature and society, while representing the opposite of the abstract speculation of “theory.” After starting Studio Mumbai, Mr. Jain, building on his experiences as an architect in Europe, approached sites and prepared blueprints in accordance with modern architectural standards. However, many craftsmen do not receive a formal education in India, and most of them cannot read characters and/or blueprints. After trying out various ways to find the best method of communicating in such situations, he realized that the most effective way was to use some concrete materials such as sketches, models, full-sized mock-ups and material studies, as well as the adjusting and testing of different plans at the actual site itself.

As a matter of course, their office far from the usual “rows of PCs and drafting stands surrounded by book shelves.” The concept of this exhibit in Tokyo is to reproduce their studio (or workshop as they call it) where “Objects proliferate the work place, with parts of buildings being constructed in the open spaces, large-scale drawings resting against walls and artifacts filling shelves and tables.” *3 The exhibit hall has two areas each connected with an outdoor courtyard, the first area on the third floor the second on the fourth floor. In order to prepare for this exhibit, at their studio in India, they reproduced the gallery space in Tokyo at full size and spent three months creating the exhibit space. Then, they broke the space into pieces, brought them to Tokyo and reassembled them at the actual exhibit site. Not only does the exhibit hall’s constitution embody Studio Mumbai’s practices, but so does the process of its compilation. 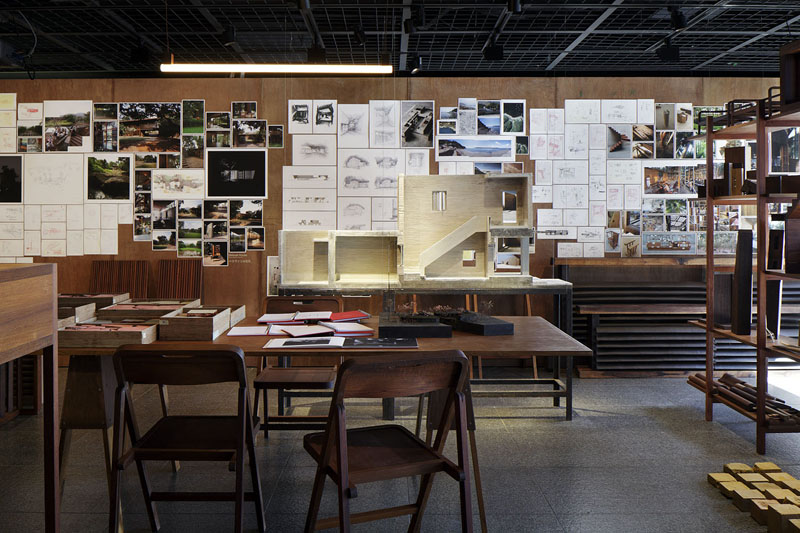 © Nacása & Partners Inc. A shot of the exhibition. This is ‘working table 01,’ placed in the middle of the first exhibit area. People can sit on a chair made by Studio Mumbai and look through the sketchbooks and photo books on the table.

The exhibit hall is filled with items directly related to their work such as bronze and adobe models (built with different materials and in different sizes as necessary), diagrams, bottled dyes, and colorful tiles, along with everyday items representative of daily Indian life, such as casual photos and drawings, which fill the room and help familiarize the viewer with Indian philosophy. A video played near the main entrance captures craftsmen making various artworks for this exhibit from their individual points of view, not just a third person view of the whole studio. By showing craftsmen’s hands while they melt metals and whittle wood, it seems like their viewpoint gets reproduced at the exhibit site. This plays a role as a superb introduction to the audiences who will soon walk into “their studio.” Also, an entire wall in the exhibit hall covered with enormous images entitled “Studies” features captions from members of the studio explaining the “informal” *4 scenes from travels within India. Those scenes include a shot of mosquito nets draped over the street camps formed by local farmers who come to the city during the summer to make money, and another of a homeless woman cradling and sheltering baby with a sari. This is a spontaneous space created with people’s imaginations under the given environmental limitations. As people stare at the space which Mr. Jain refers to as a “modest and free” space, *5 they start to wonder what really is the ‘rich’ space and how it is possible. 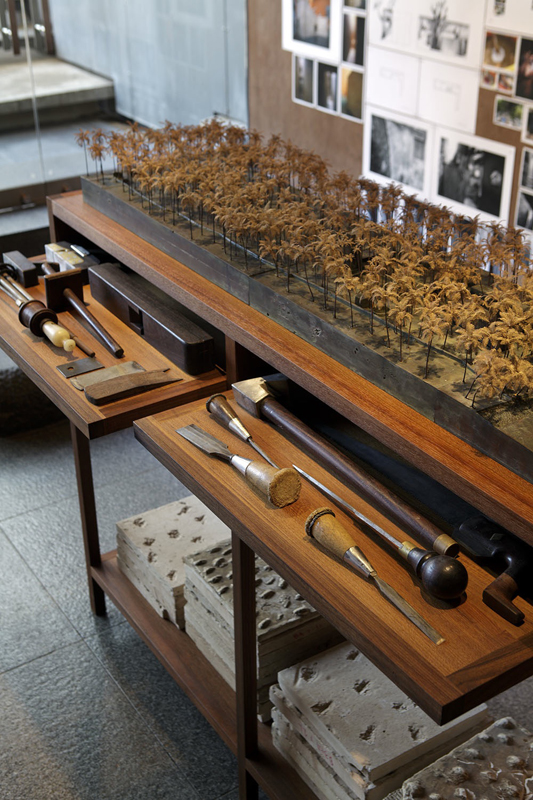 © Nacása & Partners Inc. Craftsmen’s tools, such as chisels and planes, are also displayed.

The description of a “modest and free” space also fits the style of architecture by Studio Mumbai. They say, “Projects are developed through careful consideration of place and a practice that engages intently in an environment and culture, the physical and emotional engagement of the people involved; where building techniques and materials draw from an ingenuity arising from limited resources.” *6 However, since India’s weather can be quite intense, dry hot summers and a rainy monsoon seasons, the key to a successful project is to utilize the environment. The most important part is water. Water is one of nature’s blessings and also a threat at the same time to a India’s large agricultural community. The rain during a monsoon season moistens the land and provides vitality to plants, but it can also lead to occasional flooding in the big cities, which might give a big shock to the country’s GDP. It is nigh impossible to prevent natural phenomenons, so it is necessary for laborers to reinforce and maintain irrigation facilities and flood control capabilities. Studio Mumbai approaches these sorts of practicalities with an intellectual humor. A residential house “the Tara House” made by Studio Mumbai features water as a central part of the site. When viewed from the ground, it is shaped like a courthouse; the garden is in the center and the bedroom, living room, kitchen and dining room loop around it. Under the garden, however, there is a well whose water level changes corresponding to nature’s rhythms and seasons, the rainfall situation and the cycle of the moon. People can access the well from the stairs at the central garden and the silent, dim space below makes different faces depending on the sunlight or moonlight, as well as the wind which blows inside. Studio Mumbai dares to put a well in the middle of the house while it usually gets put outside of houses to demonstrate that architecture depends on the site, and people’s life cannot be separated from nature’s gifts. This approach of leading things to completion while adding unpredictable elements shows an unfinished aesthetics of sorts. 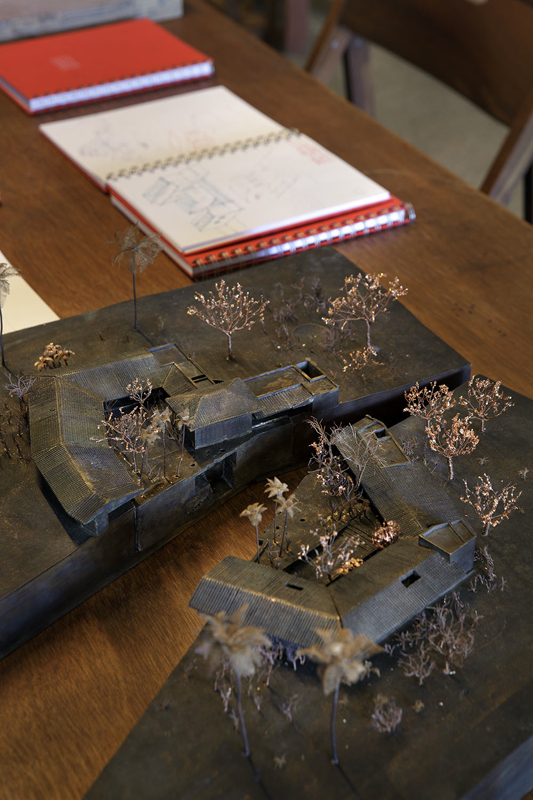 © Nacása & Partners Inc. The model of the Tara House made with bronze. It is split in the middle so that people can see the relationship between the building and the well which is situated underneath of the house.

Mr. Jain thinks that architecture is a creature in the same way that the natural environment and humanity are being forced to change, so he leaves room for architecture to accept changes, and the possibility of architecture developing itself like him encourages every craftsman at the studio to make voluntary remarks. The “Studio Mumbai exhibit” is a very organic experience which encourages the audience’s voluntary discovery, filled with fun and free from preconceptions.