colette Olympics
To celebrate in its own way the Olympics Games, universal celebration of sport, colette offers a musical marathon bringing together 16 athletes for as many countries, who compete beautifully to win the gold medal as the most unstoppable. This selection, presents the greatest champions in their disciplines: Indie-Pop, Disco-House and Synth-Soul. On sale from June 21 at colette and on www.colette.fr. 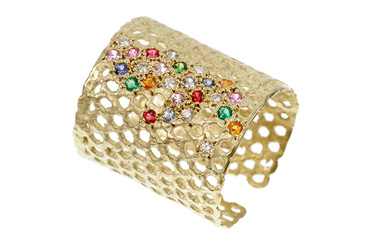 Lara Melchior
After a collection inspired by Gustav Klimt’s Gold Cycle, this season Lara Melchior presents a series of pieces in which modernity makes subtle references to ethnic jewelry. Fascinated by butterflies, Lara Melchior offers her honeycomb rings decorated with the creatures, exclusively for colette.

Parra Pierced
Inspired by the covers of melodramatic romance novels and based on his own work, the Dutch artist Parra has designed Pierced, a sculpture of 25.4 cm that has no front or back, telling his story in a voluptuously well-rounded way. With highly saturated colors and a contrast of matte and shiny, Parra depicts two figures entwined and held in a spectacular dance of passion and pain, showing the many different levels of love. A limited edition of 300 copies by Kid Robot.

Chenot
Henri Chenot has devoted himself to the observation of human beings to determine a method of care tailored to individual needs, based on the fundamentals of Chinese medicine, and featuring the latest scientific advances. The method relies on a fundamental principle: the human body works in increments of 24. During this cycle, corresponding to different times of day, there are three phrases for which he designed three ranges: Elimination (the Detox line which stimulates the natural process of eliminating toxins), Assimilation (the Nutrigen line which triggers the activation of various processes to improve the condition of the skin), and Regeneration (the Regenage line that helps correct the manifestations of aging). Exclusively at colette for France.

Opinel Sandwich x Fricote
Opinel joins the magazine Fricote for a “Kit Sandwich” with 3 knifes. Composed of a Cranté No. 113, a Tartineur No. 117, and a Tradition No. 7, this kit featuring a tea towel is at the intersection of a loaf of bread, a pat of butter and slice of je ne sais quoi. A real sandwich tool box that would make any boyscout jealous!