Even after 10 years from the September 11 attacks, the horrific images are still embedded in our memories. As the 10th year anniversary, there are several exhibitions held in Berlin which are related to 9.11. Most exhibitions handle the sensitive topics such as terrorism, war and violence directly and display the images of the heart-rending people and society after the terrorist attack. However, the solo exhibition by Taryn Simon at the Neue Nationalgalerie showed a different point of view. Even though she did not show “terrorism” directly in her work, the exhibition made us think what we need to face after the 9.11 attack. 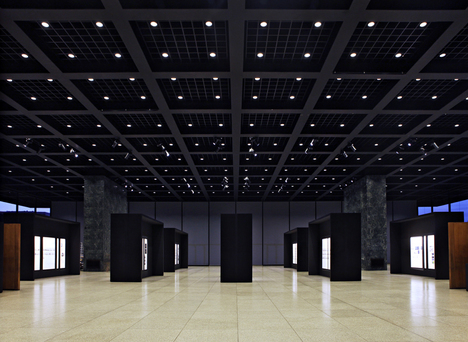 The Neue Nationalgalerie is one of the masterpieces by Miles can der Rohe, who is a master of modern architecture. It has an overwhelming exhibition space inside the extensive square pavilion with glass walls. Taryn Simon’s new work “A Living Man Declared Dead and Other Chapters” was equally elegant and strong as the 20th century masterpiece of architecture. 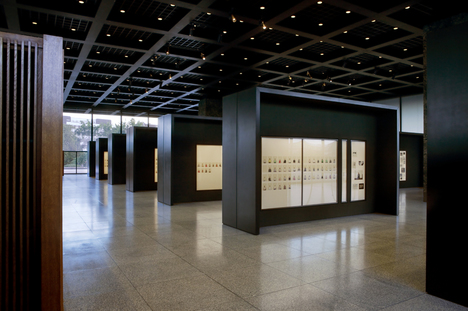 The huge jet-black cabinets are lined up in the bright exhibition space. In each cabinet, photographs and texts were arranged neatly on the white background like an exhibition in a natural history museum. Each of the 18 cabinets had the same structures and exhibit the work divided into the three parts. The left part inside the cabinet displayed the portraits taken on the white background. Even though their faces and clothes were all different, it seemed that each subjects’ personality was erased from them. The right part also showed photographs but the subjects were texts, excavations and landscapes. Most of the subjects gave objectivity by not to being eloquent. The center part exhibited the texts to explain the background of the exhibition. The top parts listed the birth dates, occupations and the cities in which they currently live. The bottom part described the background of the subjects from the right part. It made us feel that we were reading the exhibition captions. 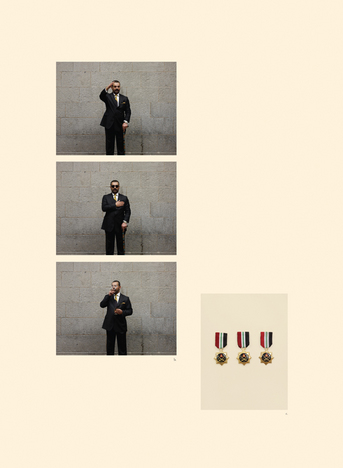 This natural history museum-like exhibition was consisted by eighteen chapters, each presenting the various real stories all over the world. Some of the subjects were well-known in history, for example, North Korean abduction of South Koreans, Srebrenica genocide, and witchcraft-related killings of albinos in Africa. Others were relatively unknown subjects such as the life of the body double of Saddam Hussein’s son Uday, the situation of Ukrainian orphanages, a gay man who got arrested in Spain, and a living Indian man who has been declared dead in an official record. Simon depicted these realities objectively. The way she focused on the bloodlines was different from how the newspapers and magazines showed the documentary. For instance, the chapter of North Korean abduction of South Koreans showed the portraits of each family members. However, Simon emphasized the absence of the family member by displaying an empty portrait of missing members who were abducted in 1977. For the chapter of albinos in Africa, she indicated the destiny of a human who has suffered from heredity by displaying the family portraits with albino members. 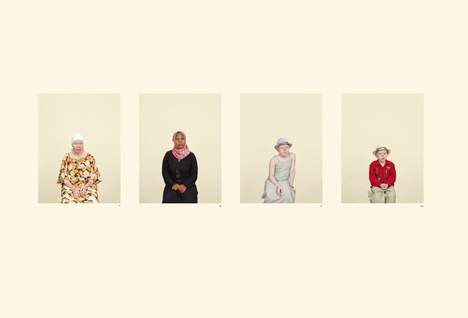 Simon’s way of researching and documenting is also clear in her previous work in 2007, “An American Index of the Hidden and Unfamiliar”. After years of extensive research and negotiations, she revealed the facts which is hidden within the border of the United States. The hidden subjects such as the cryopreservation unit, a “corpse farm”, and an inbred white tiger aroused our interest in knowing more about them. And now, Simon went beyond the US border and spent over four years to research about the various subjects all over the world. 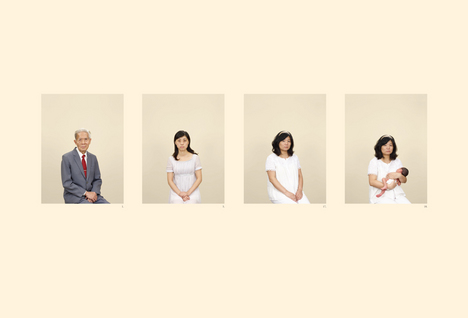 The difference between her last work and current work is the strong objectivity. In this new work, the bloodline has an important role. Taking portraits of the family related to their bloodline takes the freedom of choosing subjects from Simon. However this “freedom” is a freedom to capture their stories and occurrences arbitrarily. By getting rid of this “freedom”, she has succeeded in having the definite objectivity. Moreover, by repeating the same style of portraits, the personalities of the subjects became invisible and something beyond came out from the images. It is not only the internal factors, but also the external factors such as structures, religions and authorities. The chapter of albinos in Africa reminds us the murder of albinos in order to use their body parts and organs for the witchcraft-belief. The chapter of North Korean abduction exposes the national policy which ignores the human rights. The viewers are led to the structure behind the scene and start to take a broad view of the subjects. However the viewers cannot get the clear answers about these eighteen stories. What they can get is an opportunity to know the numerous unknown and hidden stories.

As I mentioned in the intro, there are several exhibitions held in Berlin which are related to 9.11. Most exhibitions focus on “terrorism”, “war” and “violence” which create the illusion that they are the only real things. Some work displays the suspicion against the different religion and arouses the fear against unknown matters. Although Germany might be more sensitive about terrorism than Japan because it has been actually threaten by terrorism, I got an impression that it focused only on the subjective feelings by emphasizing the pain of victims and suspicion against a certain religion. Of course having those feelings is important too. But what we need more right now is knowing the unknown matters and seeing them objectively. After ten years from the 9.11 attack, I believe that we should restrain ourselves and know the subjects without bias.