I remember that sometime ago when you happened to be in New York and wanted to see an amazing concert you have a big offer every night in the city around Bowery, Lower East Side… and so on.
Nowadays, when you go to NYC with the same aim, you should go to Brooklyn!. This is not so new… and I bet that everyone knows tris already, but luckily I was invites to play in Brooklyn NYC with my band and I got to know a bit more about this independent D.I.Y music community.

We played at a venue that was Great! one of the best venues I have ever being… and play. Because for this guys D.I.Y underground venue doesn’t mean unprofessional or leave to chance… We, as a foreign band enjoyed a great hospitality, and we felt so much at home. The guys take so much care about sound and all the setup. Brilliant!

This incredible place is called Shea Stadium (yeap! like the old Mets Baseball Stadium) and is located in Brooklyn. One of the best things about this guys is the idea of community and the network that bands and music lovers can enjoy in New York with similar D.I.Y venues like Death by Audio, Glasslands, Silent Barn, 285 Kent…

Maybe the thing that makes Shea such a unique place is the music selection they present, some of the bands that have played includes Magik Markers, Prince Rama, Blues Control, Lucky Dragons, Future Islands, Jeffrey Lewis, Steve Gunn, Dustin Wong…
Shea is a all ages venue presenting amazing artist every week (almost everyday!) but if you are not in New York don’t suffer… the guys records EVERY concert and are online at their website …HOW AMAZING IS THAT!

So after our experience playing there I meet up with Nora from Shea to catch up bit more about the venue… here is a excerpt from our conversation. 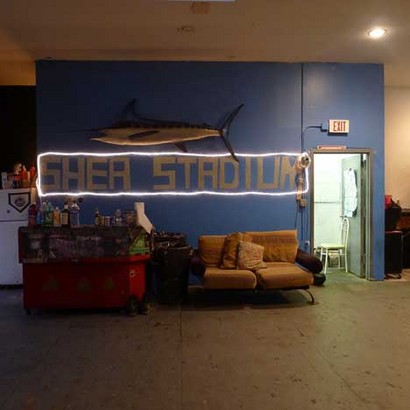 Hey Nora can you tell me a bit of Shea background?

Nora Dabdoub: Well, Adam starting it because he is a Producer and Engineer and he wanted to have a space were you can have all this shows that we go to and have fun in a place that is always there…

That was the year…?

They’ve started it in 2008, and that was the same year when they tore down the real Shea Stadium (The NY Mets Baseball stadium)…Adam and his best friend Sean are really big Mets fans, so it was kind of a joke that they will call the space Shea Stadium but they actually did.

So they started like that and one of the main points was to record all the shows to have them available for every one. So Adam with some friends from the Market Hotel also help him built the new space… and everything was built from the bottom up and it was actually in another place a few miles away from our current pace. It was there for about a month and then there were noise complains and stuff so they relocated to the place we are right now!

Which is an amazing place!

Yeah! is great cause is surrounded by warehouses, so we can go late and no one complains.
There was some people like Adams cousin Greg Fox from Liturgy who was helping a lot with the beginning of everything and they both live together in Shea …

They live there? so there are rooms and all that?

Well, there were built cause when we arrived there it was just a warehouse and everything was built up.. the stage, rooms…etc

So how is going right now?

Uhm… we are just finishing the upgrade of the new website (I hope you check out), is going to have a searchable engine were you can type the name of a band and got access to the files, cause we would like that people have it easy to check all the bands and shows.

We recorded every show and then Adam mixes it and masters it. You know Adam make the sound of about 90 percent of the shows but whenever he is engage with other stuff we always try to get the best people to make the sound… cause you know we have two decks, and some people gets kind of confuse but we have regulars in Shea who are doing a great job with the sound because that is really important for us.

You know in December when we were actually gonna launch the website we got like 200 sets, so that was when I also started editing … it was intense cause there was like thousands files to cut and edit and put up, and you know sending e-mails to the bands asking if it is Ok with them… ok with their label, you know we didn’t want to have any trouble and any band can take the recording down if they don’t like it or get a copy on CD if they ask us. 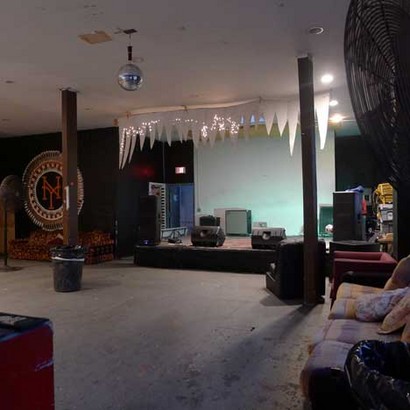 Well, that sounds like a proper job… and you´re also learning so many stuff.

Yeah I’ve learned so many things, you know I started there interning when I was in college just like for school credits and I did not know how to plug an iPod into the sound system, so I definitely got to know so much stuff… and I really like what I do… I do the booking and editing.

Yeah you know all the bands that come to play at Shea are bands that we wanna see and all the stuff we have up (website) are shows that we liked… its really great to have seen so many bands from so many places, like you guys from Spain! you know, bands from all over the world who stop in New York and have a show… its awesome. …Its great to see bands when they comeback and see how much better they got and how different it is. 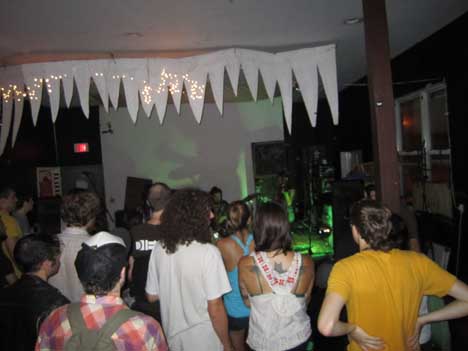 Oh Yeah! so it can happened that you have this band who played and nobody knows, no record label and suddenly they are so big…

Oh yeah! OMG! you know and them their manager call us.. and we are like: What?… which is nice, I mean, before when we started it was just local bands and it was harder to get in touch with bands but nowadays that we are established and the people knows the place, bigger bands are more willing to come.

Yeap, I just noticed that half of the audience are musicians from other bands!

Yeah and also many people who comes to the shows are asking us if they can help with something, which is great!

…just something else… you are the only girl working at Shea?

yeah! i forget sometimes, that I only work with dudes… but you know i work with really fantastic guys, they all know what they are doing and primary we have the same goal to just promote live music !!! 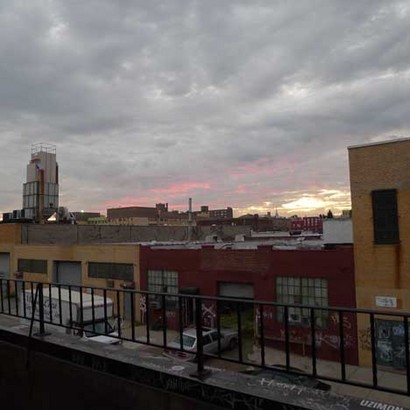 I think all of us wanted to keep evolving and stay in Shea to make it bigger… we are thinking about many stuff… like a label… you know cause recording is such a big part of Shea. You know after every show at the end of the night you have this feeling of watching something great… and i just love what we do!

And we don’t want to be know as a place were you go to a certain type of show we try to be really eclectic in the selection of all the shows, that’s something really important in our booking for Shea.
You know for us is important to create a place All ages for your community were you can come with your pears and watch a great show!

Long life to SHEA STADIUM
BTW…Nora is the sweetest person to talk with! Thanks Thanks Nora