“FUGAHUM” a kingdom that creates a new concept.

FUGAHUM is a keen fashion brand started in 2006 by Akiyoshi Mishima, an artist and previously worked as an art director at Enlightenment until last July, and a fashion designer Asuka Yamamoto, and a new member since 2007 Takao Mishima who works on the Men’s line. Without sticking to single field such as “fashion” and “art”, they showcase the FUGAHUM kingdom in the form of collections, which are created out of their unique ideas. As one of the elements for the art project that will complete with 10 volumes, the Vol06, Spring Summer 2010 collection “PRIMITIVE CHANNEL” was presented in the end of October. FUGAHUM revealed their kingdom including their latest collection. 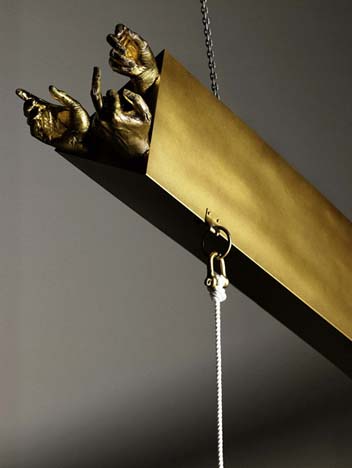 Please tell us how did you start FUGAHUM.

When I (Akiyoshi Mishima) was asked to work on an art exhibition for joint fashion presentations called “rooms”, I and Asuka collaborated together; I made works with building a concept FUGAHUM kingdom and She did a presentation of her clothes inspired by my drawing work. That was our starting point. Even though the clothes shown at the presentation were not wearable, we decided to make wearable clothes and started FUGAHUM from the next season on.

You have just presented Spring Summer 2010 collection “PRIMITIVE CHANNEL” as Vol06 for FUGAHUM. Can you please introduce the collection and its concept?

PRIMITIVE CHANNEL = receiving from primeval time.
We intended to include a message not to believe only visible things but to have your own aesthetic. It’s not about the sixth sense, but I believe people wouldn’t go in the same direction if you nurture your own sense to visualize things with senses. 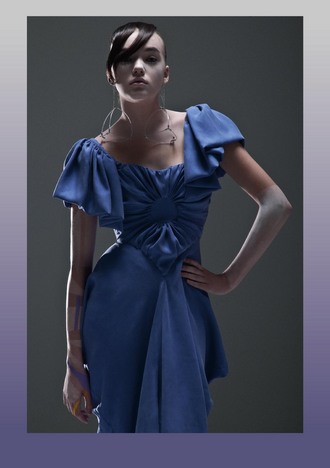 First, we set up a theme for making clothes, trying to return to the origin. We made a dress directly designed onto the body, not creating from the 2D surface to form with not gather and bias. Around a circle pattern like a black hole, we arranged gather radially and then selected a fabric that suits for the pattern. We decided to use twilled silk.

For every collection we make a symbolic piece for the ladies line, and this dress is the one that connects to a concept for this latest collection.