Another edition of ArteBA walks by and there’s not very much to say. This contemporary art galleries fair recruits a sample of what is in the market nowadays. After the 5 day collective exhibit ends, all I can hear is criticism among classic and not so classic artists. But that has always been so. It seems genuine art is having a hard time nowadays in Buenos Aires. Everything happens in small places and not many people have access, not only because of the excessive price of the works but also because of their lack of visibility.

Fortunately, we still have some places to look. And one of them was inside Young Neighbourhood in ArteBA, it’s called Jardín Luminoso (Luminous Garden) Gallery. Just as I was walking by that little spot, a painting called me and soon led me to Magdalena Rantica, a young artist I’ve been following for months. There she was, with a big smile. 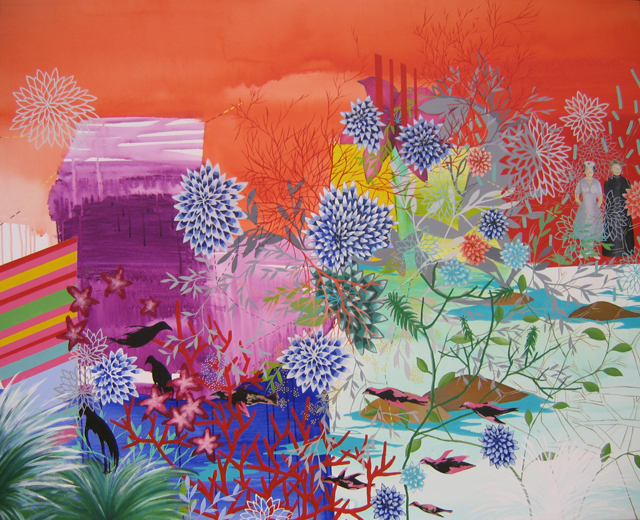 So how did you start painting?

Well, I started painting at school, but I also loved many other disciplines, like theatre, choreography and ballet. Anyhow, soon I discovered what I really like was Fine Arts. Then I travelled to Mexico, and it was such a big experience for me. I realized that this whole universe that I was trying to recreate through my work actually existed in one place, this place in the south of Mexico where I lived. This town filled with markets and fresh tropical fruits and colours, a very unique weather, and flowers with butterflies, everything was there.

After a year and a half, I returned to BA, where I did some research on textile, its symbolic universe and the relationship with human anatomy. I worked a lot with cultures from Mexican South East. My first exhibition in 2001 was called Las Tejedoras (The Weavers). 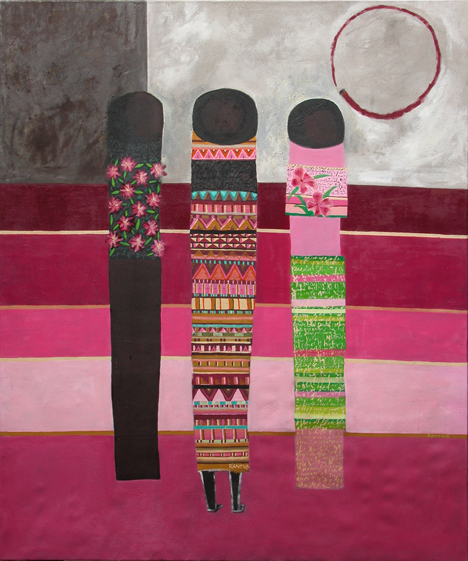 What came after that?

After that exhibition I followed the idea of organic weaving, because I’m a Eutony instructor so I work with that concept. That was the time of the dresses that mixed paper with parts of trees. They symbolize organic texture, covering and revealing things at the same time. In 2005 I returned to Mexico with a scholarship, and everything got a new shape again. I reconnected the dresses with the organic. All of this represented a very tight world, though, and after that I needed to break trough. All these structures expand and open, so colour appears again, now without the boundaries of shape.

I believe kitsch aesthetics inspire me, colourful table cloths and little stores, some animals and nature. All of these inspire me. 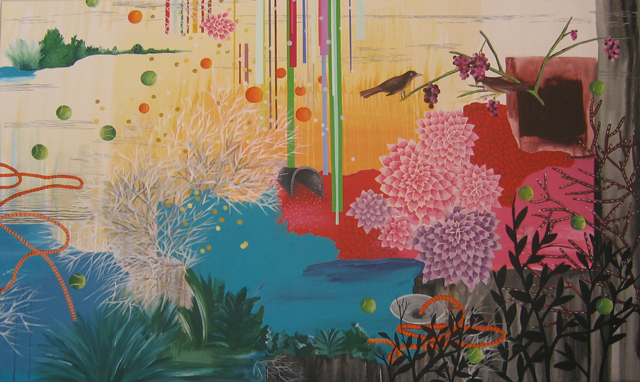 Magdalena’s work is a mix of many things: naïf, colourful, big nature explosions and a brief appearance of disruptive elements. Her last year’s exhibit at Zavaleta Lab was called “La eternidad más un miércoles” (Eternity and a Wednesday). I like this title and want to know why she chose it.

She then tells me she worked on this exhibition soon after her father died, so she was still in mourning. She used to spend all afternoons painting in the atelier, alienated in her own world, inhabiting some kind of eternal time. She remembers “time and materiality disappeared”.

On Wednesdays, though, the curator of her exhibition used to come into the atelier and he would guide her into a new light, Wednesdays light. 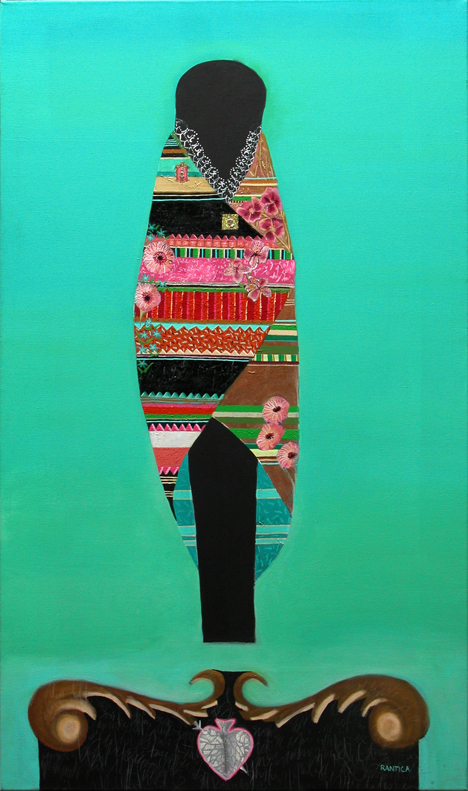 I believe this dichotomy inhabits your work as well, is that right?

Yes, absolutely, all my work is about dichotomy. What is crazy about all of this is to have someone else looking at your work, appreciating and liking it. It’s so magical, the idea of this appropriation.

What was your ArteBA experience this year?

I think ArteBA has become a commercial event than something that genuinely promotes contemporary art. The good thing about it is this great visibility; it makes the dice roll for those who participate. I’m against this nowadays power of “young art”, everything has to be young, that seems to be the new value.

We keep talking about her projects and her desire to show her new works. Then she displays giant paintings on the floor and I can’t believe the beauty of what I’m seeing.
Hopefully, we’ll keep seeing more, and we hope Magdalena’s spirit keeps flying high, along with her brushes in this lovely multi-colour world.