While Fictive days dealt with characters from film culture, the piece ‘Assisted Living’ set up a different premise – a live TV studio. Multimedia artist Marisa Olsen devised a television show, for final presentation toward the end of the Festival. Viewers could take part by sitting in the studio audience, and an open call went out on the website to hire crew members for the show. 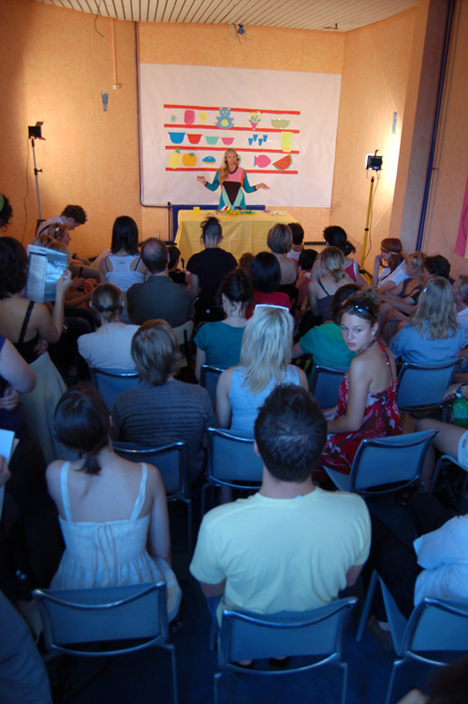 The studio was set up on the ground floor of a soon-to-be demolished housing complex right near Alexanderplatz, the main city square of Berlin. The artist took the role of talk show host, in a parody of Martha Stewart’s US TV show format, presenting ‘neat’ craft projects and cooking recipes for a fictitious technologically advanced audience somewhere around 2030. She provoked us to imagine what a mainstream day-time TV show of the future might look like, with environmental concerns (like radioactive heat and global warming) making our need for counteractive household products all that more urgent. Protective goggles from the sun’s damaging rays, recipes for heat-resistant salads, and stain removal from furniture (due of course to increasing water levels across the globe), were all presented to the audience via short but sweet demonstrations, and taped live as the final show in a 15 part series. 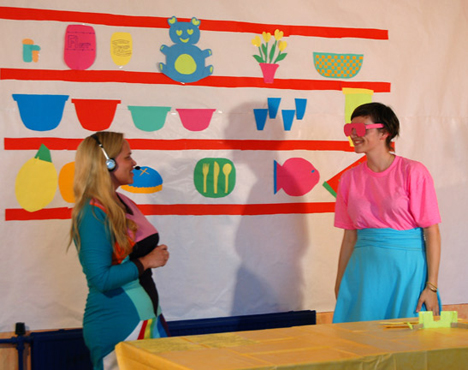 I enjoyed the tongue-in-cheek play with the TV format – the oversized day-glo props, the studio producer shouting instructions from the back of the room, and Marisa under the studio lights, talking through the headset. But I wanted to know why she decided to get involved in New Life Berlin.

‘What interested me about the Festival was the crossover between art and activism – I want to get involved in more risk-taking work, and it seemed a good platform for developing my TV show format. There’s always a bias against open-call projects, but for me it’s more about whether it suits the particular exhibition or not’

With shows at the Whitney Museum of Modern Art and the Venice Biennale, and a one-off performative piece on American Idol, Marisa Olsen is already a ‘household’ name. Which makes New Life Berlin all that more interesting – a range of artists were involved, some more advanced in their careers than others, but no means an exclusive selection of artists based on their name alone.