I believe some people live with their inner child right beside them. Every morning, they wake up together; they have breakfast together and spend all day together. The child is the one leading the way, while the adult part of this human being and the world outside do the rest. Santiago Idelson is one of these people. 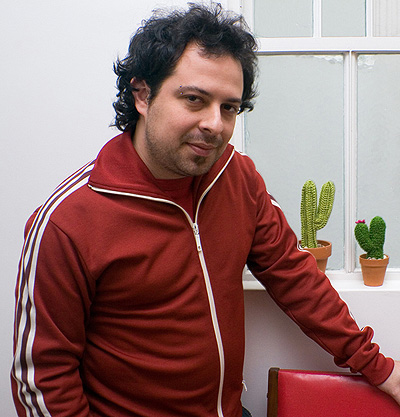 What did you want to be as a child?

I wanted to be a fireman or an ice-cream bicycle salesman. I was very curious as a child. I loved music, toys, computers and I made horror short films with my friends. My work right now is a mixture of everything I love. What I do is very similar to what I had in mind as a child. 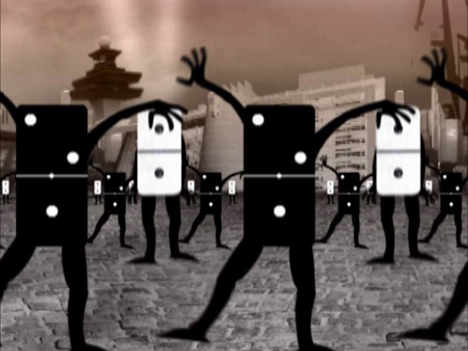 From dancing dominos, three-dimensional flowers, a family of scientists who always fail, schizophrenic toys, a bowl of letters and hearts made of candy, we notice that Santiago is a machine of ideas. One body, heart and mind dedicated to produce and process all kinds of ideas, 24 hours a day.

When asked about his profession, he considers himself a director of audiovisual pieces. “I like to film, I like to draw, and I like to direct the different aspect of a motion graphics piece or an actor’s short film. I work with a certain aesthetics which makes me who I am and goes beyond the format I choose to show it”, reveals Santiago.

“I studied drama, music, television and I worked in television design. I’ve always been inspired by movies and music. I find things in them that move me as a spectator, and I also relate to them as being a part of what I want to say”, he tells me.

In the last 5 years I created Pattern, a Studio specialized in motion graphics and film, which also produced a line of design toys. I was the director and could also combine activities that were independent before”, he adds. 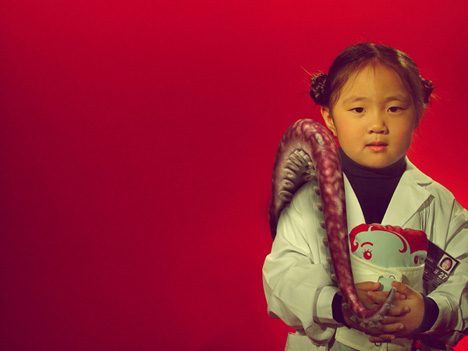 What do you enjoy about your work?

What I enjoy the most is to see myself through my work. I love working in an audiovisual piece from the beginning to the end. One nice example of this is Scientifik Familie, a short film where a family of researchers explore the boundaries of modern knowledge. This piece ended up as a very close aesthetic approach to what I had originally in mind. I listened to songs that brought some images, there was a casting, we created a whole universe of a European family of scientists, a mix among warm and sordid environment, somewhat hermetic, beyond understanding. It’s a very visual experience. Each element converges at a certain point, giving birth to a universe with its own rules. That is very exciting for me, like an orchestra with every instrument sounding like they’re supposed to. 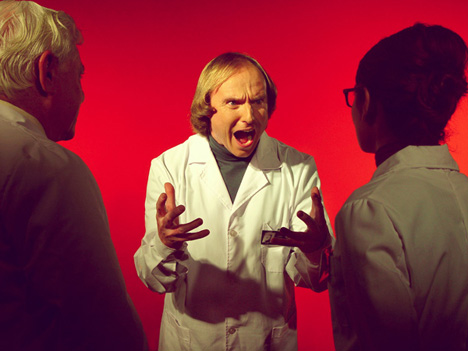 So this piece is your favourite, right?

I like it very much. But what I really like is the novelty of things. When I decode something that’s inside of me into a film or a drawing, I feel like giving birth to a child. It isn’t something intellectual. When the work is personal, the origin is primitive, playful, and unconscious. It’s like a volcano of ideas that lie inside of me.

So, what are the topics that move your works?

I’m attracted by the first half of 20th century in Europe, the industrial age with strange machines, the immaculate environment of classic Hollywood movies, construction and deconstruction structures.I work with the idea of the failure of a scientific process cohabiting with chaos and the unpredictable. We can see this in Flower Maschine, where there’s an unclear limit between a structural growing and an organic machine, or the plush toys: scientists whose experiments fail. There’s always an apparent order surpassed by an emotional unpredictable chaos. Maybe it’s my own search for understanding life. Life if something so large, something with its own rules. The biggest attempts to control everything are the ones that fall more spectacularly.