Having first opened its doors in 1985 on Cork street (Mayfair’s historic heart of the London’s art scene) the Victoria Miro has continued to be one of the most influential contemporary commercial galleries in the British art scene.

Just a stone throw from the Royal Academy of Art, Cork Street retains its prominence as central London’s center for commercial galleries. Yet, in spite its historical setting, a few galleries, namely the Victoria Miro and White Cube, have confidently abandoned Mayfair, and innovatively re-established their selves in the East End of London, confirming the areas status as the new contemporary art center for London. . 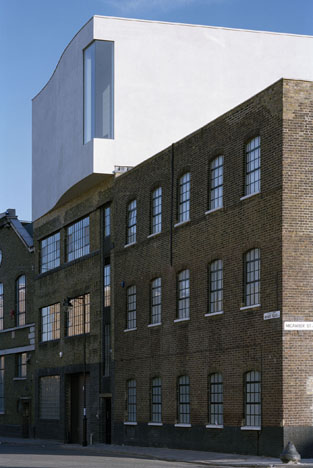 The move in 2000 much released the Victoria Miro from its confined setting in “chartered” central London, and a later expansion into the adjacent building in October 2006 almost doubled the galleries space. The setting, a revamped Brick Victorian Furniture factory, reveals an expansive 17,000 sq foot environment where architecture and nature combine to provide an inspirational setting in which to view art, as well as one of the largest commercial spaces in London.

Originally conceived by Claudio Silvertrin Architects and executed by project Architects Michael Drain Architects, elements of the building’s original structure gracefully merge with the contemporary viewing space of the gallery.

The gallery has consistently exhibited some of the contemporary art scenes most influential artists, including two winners of the much coveted and illustrious Turner prize, Chris Offili and Grayson Perry, as well as four Turner Prize nominees: Ian Hamiliton Finlay, Peter Doig, Isaac Julien and Phil Collins. Victoria Miro herself, is said to have an acclaimed eye for great and innovative artists, and is renowned for nurturing young artists amongst and while exhibiting some of the mammoths of the contemporary art scene.

The Present Exhibition at the Victoria Miro presents revered artist Yayoi Kusama. For the first time, the gallery has dedicated the entirety of its space to a sole exhibition. Entering the gallery one instantly recognizes Kusama’s use of obsessively repeated forms, and is confronted with 45 new silkscreen works and two sculptural pieces from the nineties. 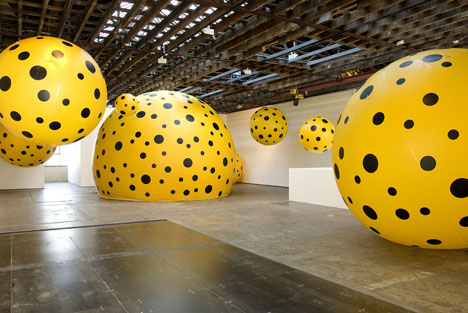 The canvases predominantly covered in a visual language of figurative images, e.g. female profiles, outlines of lips and eyes, dotty organisms, serpentine forms and doll-like figures, swoon one into an almost dazed and dreamlike state, much reflected by titles such as A Dream I Dreamed Yesterday, Woman in a Dream, Infinity Cosmos. The two freestanding sculptural pieces reveal a mirrored room, where the view peers into a kaleidoscopic box of infinite mirror reflections and fragmentation. 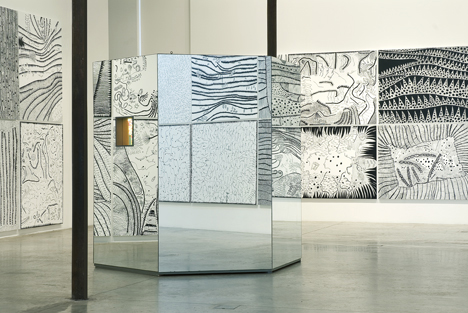 The upper gallery opens to further sculptural forms, with Dots Obsession – Infinity Mirrored Room. The piece comprises of a series of giant inflatable polka dots, which are in turn polka-dotted themselves. The largest of these dots, invites the viewer into its center, where one is fully emerged into a mirrored infinity room, and once in turn surrounded by alike formed polka dots as in the exterior. The sensation is very much as re-entering the space infinite fold.