DIESEL, the world fashion brand, also has lots of fans in Japan. The DIESEL DENIM GALLERY, developed by DIESEL, is a space with a shop and gallery located only in New York and Tokyo. Since it’s opening, they have consistently supported young artists there, and this time the DIESEL DENIM GALLERY AOYAMA features architects for the first time.

The first architect of the series is Ayako Maruta who has just gone independent in 2006 and has been gathering attention with her works in commercial spaces and installations. Her exhibition at the first floor of the DIESEL DENIM GALLERY AOYAMA ended up becoming a dramatic work- an installation with a very architectural display as a main subject while blending with the products’ presence at the same time.

I had a chance to interview Ayako Maruta about her thoughts on the exhibit. 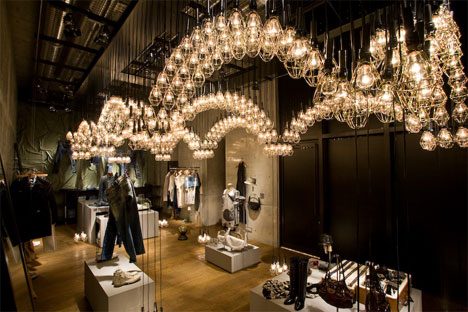 How did you decide to make the work with construction cables and lamps? How were you inspired by those materials?

The production started from thinking about the space of the DIESEL DENIM GALLERY. Since the space was 4.8m in height, I thought I’d like to make the installation dynamic by hanging it from the ceiling. Then, I started thinking about what to hang for the first time. I had been creating my works with such familiar materials such as steel and cardboard boxes before, and I thought I wanted to suspend something from daily life this time as well. The lamp from construction sites is what I often see working in architecture. As darkness sets in, the lamps and gold shades beautifully come up in the rough construction site. I felt something in common between the beauty of the lamps which were only made for practical use while the history of denim, which was originally created as work clothes, evolved. That’s why I used lamps as the material of the work. 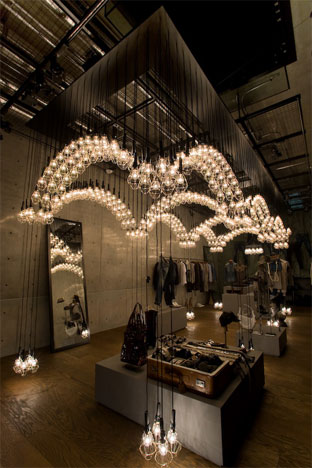 What was difficult in the production process?

I think I spent most of the time thinking about how to arrange the assemblage of the lamps. Only one lamp could be suspended with one cable but I wanted to clear this limitation and have a strong message not showing such limitation. Therefore, I decided to use an arch and column from my architectural background. The lamps express the curved lines of the arch and the decorative parts at each side of the column while the cables express the surface such as the column or the wall. Originally, the form of the arch and column was made by heaping up stones from the ground but I thought it might be interesting to make the same shape with suspended figures. 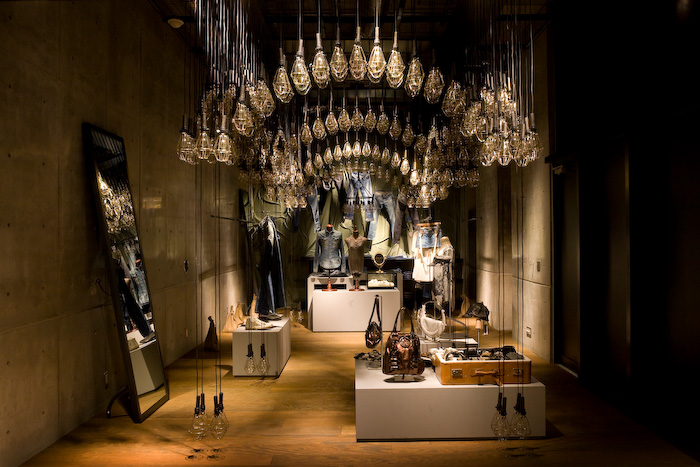 What do you think is the most attractive part of this installation?

It’s that people can interpret it in various aspects and ways with regard to the shape and configuration or real substance and virtual images or object and space and so on. “Suspended Figure” has columns in the air and the arch doesn’t collapse even if cutting off in mid-course. It is impossible with the real arch built up from the ground. There is a sense of discomfort to take the style in the same shape with totally different configuration. If you pursue this sense, you might find out how we recognize the shape. Also, this work expands on a scale close to the space by assembled single objects, but I asked, where is the boundary between the object and space? “Suspended Figure” has a glamorous physical appearance, but I would like people to appreciate the depth and tolerate various thoughts, which beyond the glamorous look.