Three ovals representing eyes and mouth – if you see this simple combination it’s likely that you are confronted with one of Boris Hoppek’s pieces. But it’s not the only recognizable stylistic feature in his work. There’s also his sure feeling for perfect curves and a certain brown tone that he uses for example when painting his cardboard objects. Although his work is ranging from huge spraypainted canvases to photography of “latex pussies” to delicate watercolor paintings, the current show at Heliumcowboy Artspace has a coherent look and despite the often drastic subjects it radiates harmony. 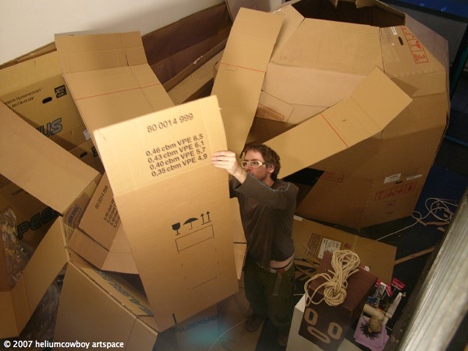 I’ve been involved in the exhibition quite some time before its start when getting Boris’ exhibition catalogue “Lavagina” into print. When Boris finally arrived at Hamburg five days before the opening he brought with him the sunny weather from Barcelona. I think he did it on purpose since he seems to like working outside. Besides, working inside was difficult since all gallery floor was covered with huge amounts of cardboard. Some of this thick cardboard became the above mentioned masks and objects but the larger part of it miraculously merged into an enourmos woman sculpture through which visitors (and gallery staff) would have to pass when entering the ground floor of the exhibition. 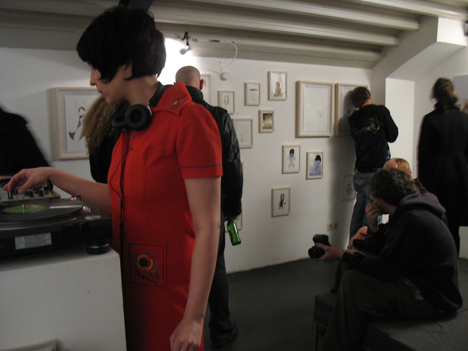 Boris was mastering the chaos. I really wondered how he managed to work concentrated and steadily while his surrounding little by little shifted into pre-openning agitation. Most of the work (except the watercolor paintings and the puppets) was done on site during these four and a half days. Boris sprayed his canvases on the gallery’s balcony while we were passing by behind his back. Being used to create art on the street might lead to such a stoic working style. He was only interrupted by journalists that wanted to ask questions about concepts, intentions, the artist’s life etc. 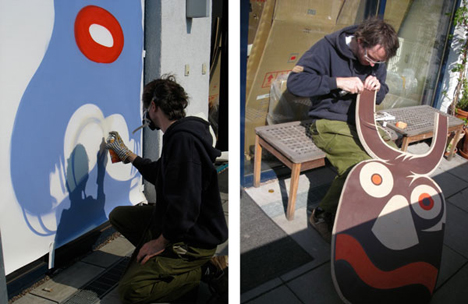 I was busy putting hundreds of catalogues into plastic bags so I don’t know if they got satisfying answers but I doubt it since Boris doesn’t like to explain much. So you’re on your own with your impression of his artwork.