On Saturday, June 9th, 2007 I had the fortunate opportunity to attend the opening party of “Everests” held at Shift’s own, SOSO. Having met Takahi Kawanishi, the artist behind “Everests” the night before, I could tell that this person is very easy going and definitely an interesting person. The night started out with the opening party at 7:00 pm as people trickled into the cafe slowly but surely. The cafe had already been decked out with the exhibit and set up with music equipment, so it was just a matter of time until more people, and Kawanishi had entered. 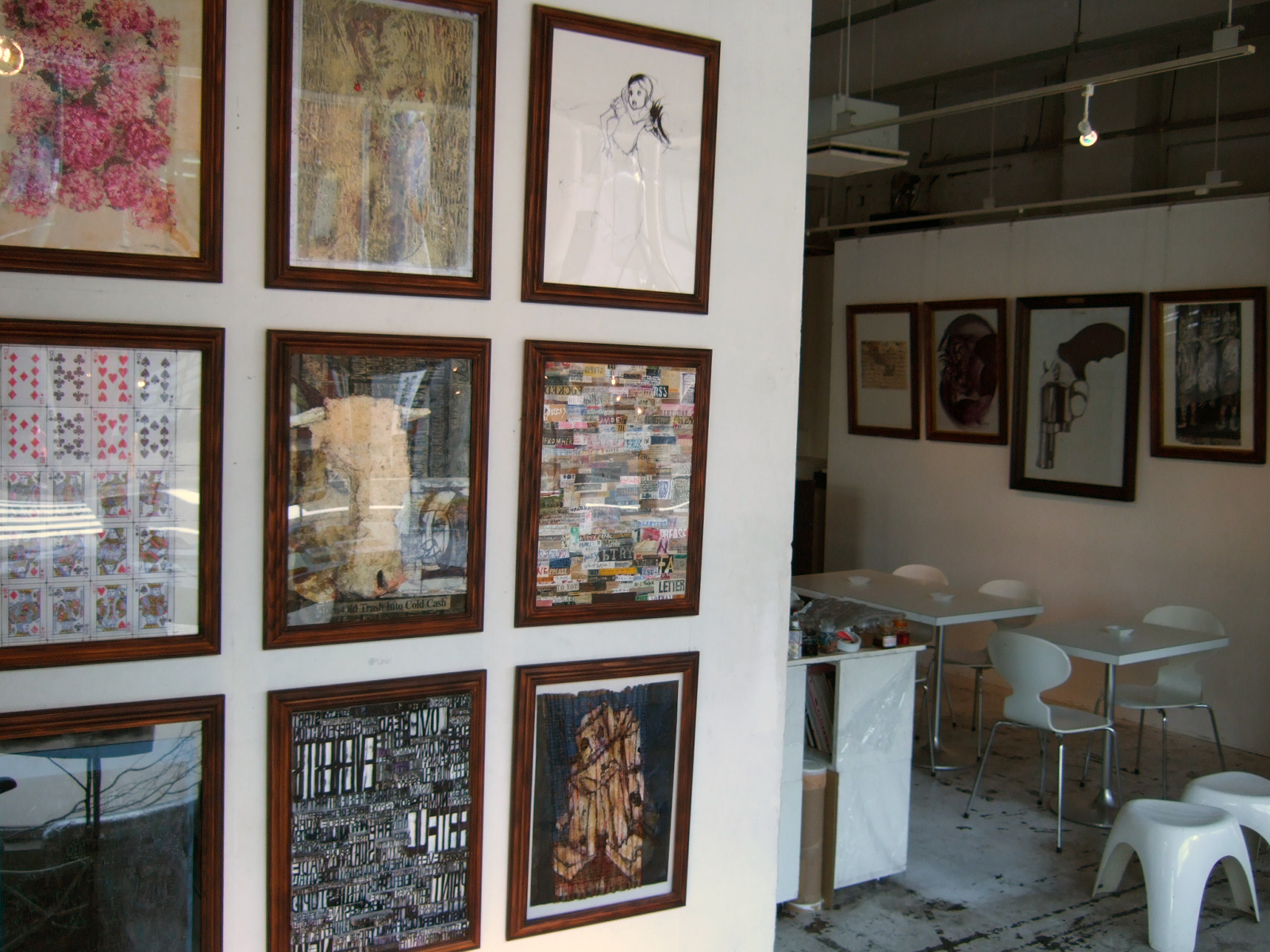 The exhibition had a good reception with many pieces being shown around SOSO. Displaying different styles and mediums the pieces had quite a varying and unique feel about them. Some popping out of the frame, others so vivid and expressive, and others still completely different with the artist’s humorous side showing through. One of the pieces that caught my eye particularly was one piece with sheet music, with burnt edges that seemed to be pasted together, yet somehow represented as one. With varying sizes and feelings from each painting, you could tell that Kawanishi’s personality had shown through each and every one of them. 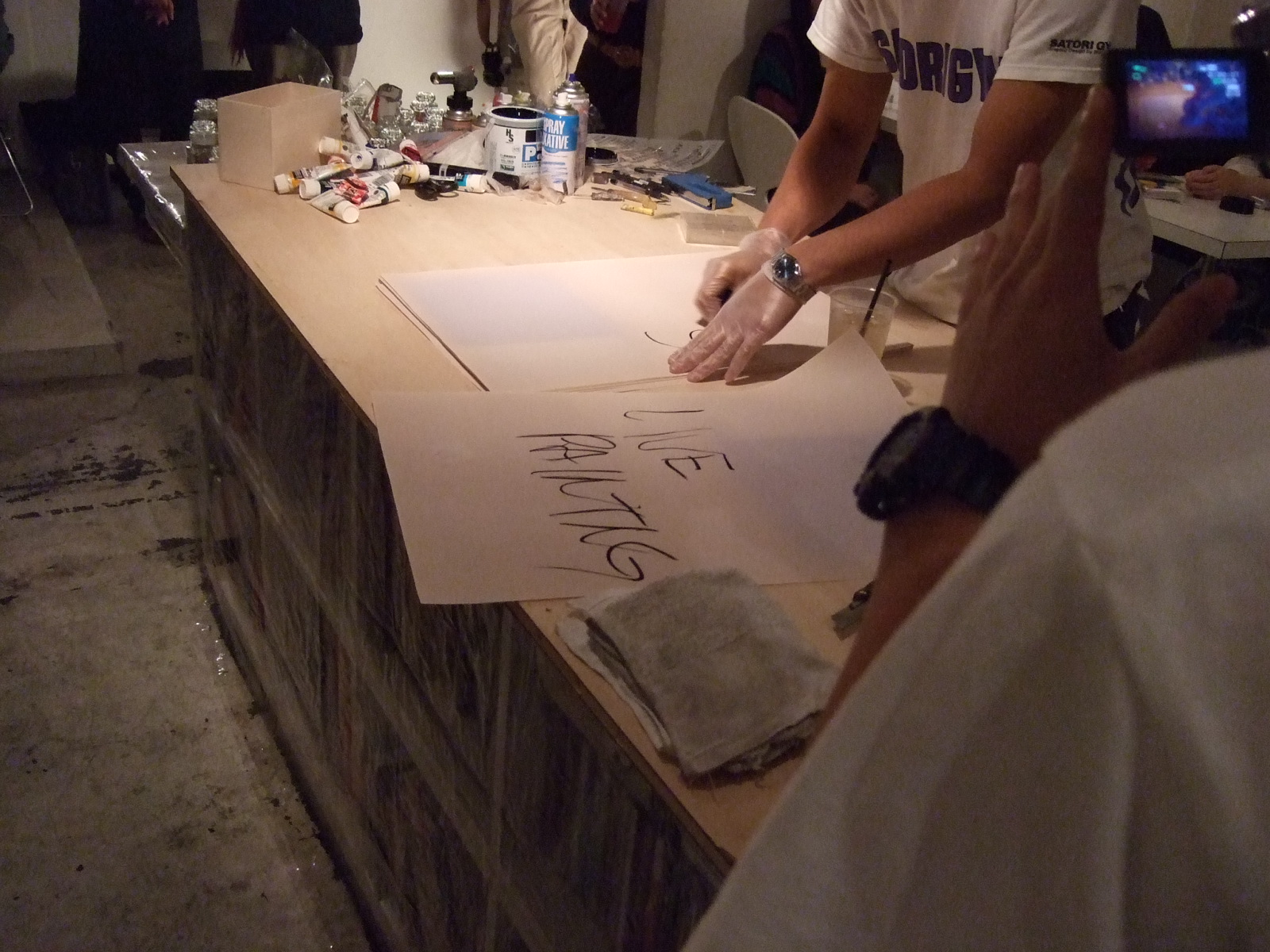 The exhibit in full swing as well as the party, led to the highlight of the evening, the live painting by the exhibits own, Kawanishi. He entered, ever so stoic and composed wearing his “Satori Gym” t-shirt, which he apparently bought for 200 or so yen, he wrote out “Live Painting” and “Start” as he suddenly threw up the red liquid he had been holding in his mouth. Rather sudden and unexpected, the crowd laughed along as he begun drawing various characters including a very familiar face, Doraemon. Seeing live painting in itself is different as I have never seen it myself and with Kawanishi’s unique and fun personality I could tell that it was going to be very interesting.

Using multiple mediums, paints, pastels, ink blown from a ball point pen, it was almost as if his drawings and painting was evolving as he continued, starting as one thing and eventually transforming and becoming something completely different. Where a cute character can become a scary face, then a woman, it was definitely some thing to be seen. 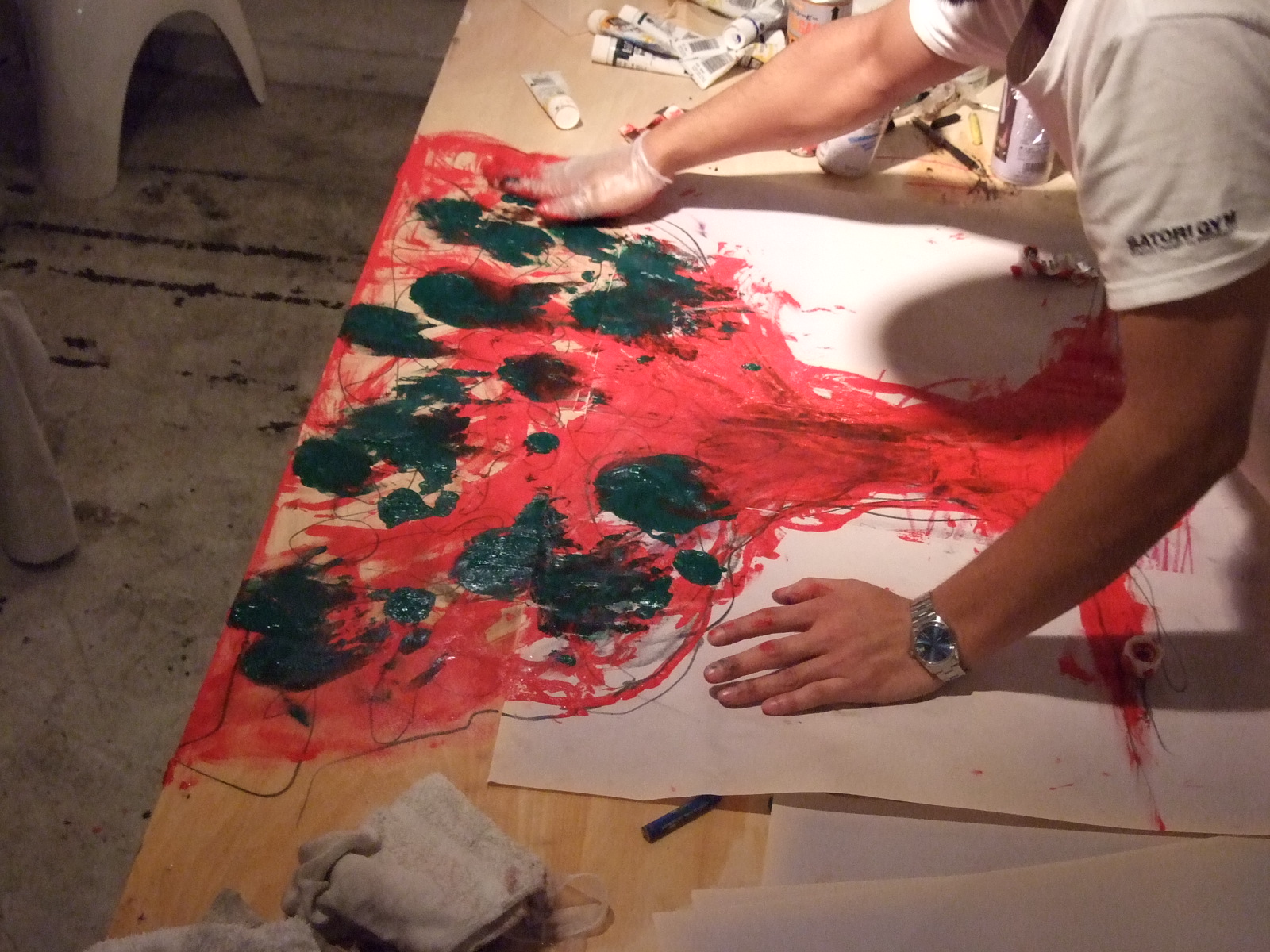 Among other things his “ever changing painting” took the form of a tree, three faces, an abstract image of the skyline of some unknown city at night, and other things that this writer still doesn’t know what is. With that however, he then took out a frame and starting framing what many thought was the final piece, but almost dissatisfied with what he’d done he dropped it on the floor, picked up the paper and covered it again in white paint. As many looked in awe at what was happening in front of them, he continued to change his painting and as he was, it was almost as if you were able to see what his mind was thinking, what it was like to see through an artists eyes.