“Maid Kissa” (Maid Coffee Shop) In this cafe, a waitress who wears a black or navy blue colored frilled white apron dress with a hair band so-called the housemaid clothes meets you “Welcome home” as you drop by. A visitor takes a photo with her, and some events and goods sales are also available. Each shops are quite characteristics where otaku from animation, manga, and games meet together and create one cultures. Akihabara in Tokyo has a biggest communities. A number of this kind of coffee shop is small here in Sapporo, however, this is the one of the cities that leads a trend for Maid Kissa. 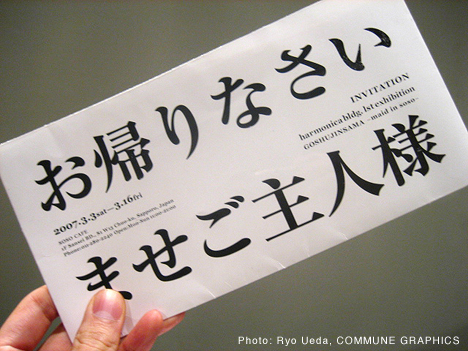 Harmonica Bldg. is a Sapporo based man and woman unit, an art director Naoki Fujita and a designer Kaori Kojima. Have received prizes both nationally and internationally. 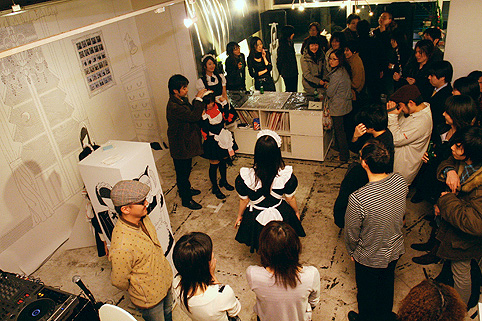 I also like and see often their works such as apparel company’s promoting items, art-directed books, and other originals. I would say that they make things modestly with a specific clear concept while carrying peculiarity or they’ve got steadiness and neatness with slight avant-garde taste. 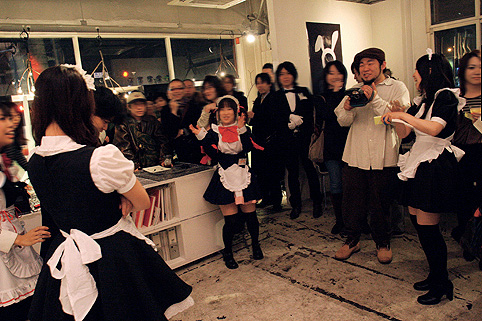 An exhibition of Harmonica Bldg. was held at SOSO CAFE. I joined their opening party. Very excited by hearing that they were having a secret event at the party. It was easy to imagine a packed inside as I arrived there 10 min. late and saw an atmosphere of the entrance. A place has changed to Maid Kissa space where some costumed maids working. They are all experienced maids, I heard. The cafe resounded with Anime soundtrack from DJ booth.