First time after its temporary closing last year, Inter Comunication Center (ICC) has reopened a part of its exhibition space and admission-free community space, such as the library and mini-theater, to the public.

The gallery exhibits a wide range of remarkable artists, from forerunner of media art to emerging artist, not only within Japan but also from abroad. A total of 17 works by 14 artists is on display. Please refer to the ICC website for further information on exhibited art. On this website, you can inform yourself about ICC activities, watch live footage of symposiums, and access the open video archive called “HIVE“. 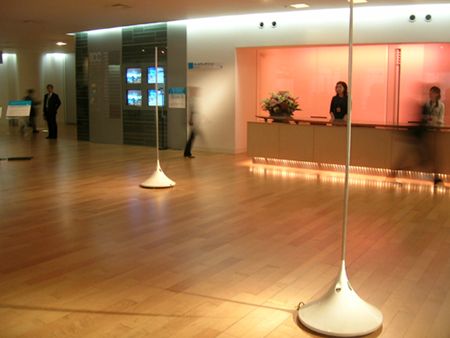 The community space is called “Open Space” by ICC and exhibits works in different zones, such as “Art & Technology”, “Research & Development”, “Network”, and “Archive”. “Sound Pole” by Takeshi Ishiguro welcomes you in the Network Zone at the entrance.

The volume of the sound coming from the pole changes depending on the movements of the audience and the distance between the pole and the audience. Through the music by Michiharu Shimoda of Silent Poets visitors can enjoy the ambience of the space surrounding the pole. The poles are also accessible through the Internet terminal, thus enabling real time interaction between the pole, the music and people from both ends. 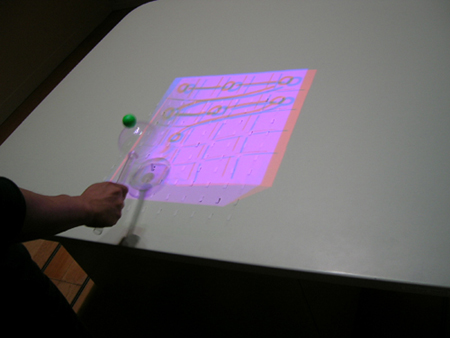 Most works focus on the experience of interaction between technology, art, and people. “Air Jet Interface” by Yuriko Suzuki and Minoru Kobayashi of NTT Cyber Solutions Laboratories caught my attention because of its clear explanation and unique experience. After encountering this work, I got to thinking about something people normally take for granted, such as relationship between vision, hearing and tactile sense. To engage in the artwork was also entertaining.

When you wear a pair of special glasses, you see a projected image. When you try to touch a projected object with a ball on a stick, the shape of the object changes accordingly. At the same time wind blows through the stick, giving it not only visual, but also sensual experience. Together the whole experience makes you feel as if you are touching a real object.

Even if its mechanism is unknown, you are constantly aware of the fact that the object you see is unreal. Then it gets harder and harder to distinguish the difference between virtual world and reality. Because of its simplicity, everyone can grasp the borderline between virtual reality and real world more than any other works I have seen before. As stated in the title, wind had a particularly dominating presence in this work.