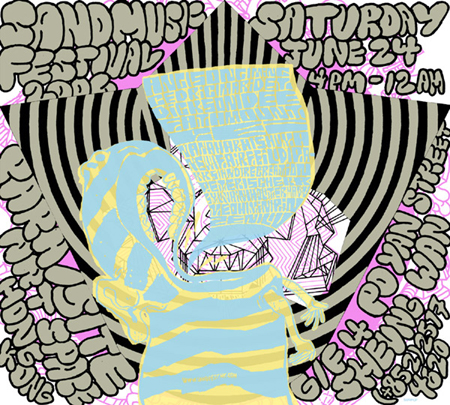 On a summery Saturday in June, the stark gallery space of Para/Site will be filled for eight hours with music that breaks boundaries, eleven acts from all over Asia, and plenty of music-lovers. As Hong Kong’s first festival showcasing experimental music, what’s noteworthy about the SAND Festival is that its beginnings rest with a story of four friends, and a place called White Noise Records.

To a select few in Hong Kong, White Noise Records is as much an idea as it is a place. This refuge of a record shop on the second floor of an unassuming building in Causeway Bay is, to some, a plain necessity, fuel for the soul. Wilson Lee, one of the SAND organizers, visits White Noise about once a week. He explains that “if one doesn’t have the heart to seek other music out, Cantopop is everywhere.”

The other festival organizers agree, because they share the same experience. Like millions of Hong Kongers, Wilson, George Chuk, Enoch Kwan, and Gary Ieong grew up besieged by constant waves of Cantopop. Fortunately, the age of the radio evolved into fansites and fax-in mail orders. When godsends like The Wire Magazine and MP3 filesharing became available, they were able to traverse a multitude of pathways that led from Cantopop to Pearl Jam to Radiohead to postrock to metal to drone to free jazz. Enoch describes it as “downloading a thousand songs until the hard disk explodes!” Despite the almost infinite nature of downloading, even that is no longer the only option for those in search of new music. “So many styles are accessible at White Noise,” Wilson says. “I play guitar, and here, I can find so many ways that people have used the guitar. It makes you realize the possibilities.”

This momentum doesn’t end with records and MP3s. Inevitably, the drive for new music leads to live music. “Back then, there were no live shows really, just bootleg videos,” George recalls. But now, that’s changing. In two years, White Noise Records has already hosted in-store shows that range from drone, chanting, and organic sounds to performance art. Gary also notes that the last five years in Hong Kong have seen the growth of the indie music scene. “People are increasingly putting out homemade cd’s,” Gary notes. “In the past, people here didn’t really pay attention to music, but now the general public and the media are becoming more conscious of music.” He adds that many who make music tend to be steeped in the music of the past, and that musicians could benefit from listening to everything, underground and current.

This is one of the goals of the SAND organizers. It goes without saying that they are challenging the dominion of Cantopop, but they are also – ambitiously and admirably – aiming to go beyond the alternative stronghold of indie rock. The idea for the festival came together because they wanted to provide that space for local, experimental music. Making a deliberate choice to include more than one style, George jokes, “Eleven acts of laptop music might be a bit boring for the audience!” Wilson adds, “We want to give people more of an experience. Even if eleven laptop sets were exciting, we want to break boundaries.” George says that they also want to show that electronic music isn’t only made by people with laptops.