It’s been a while since a genuine “art star” has had a show in Hong Kong, so the opening of Cao Fei‘s COSplayers at Para/site Gallery in Sheung Wan was quite an occasion. The young Guangzhou-based artist has been busy these days, flying from Germany to Japan to New York’s Chinatown to keep up with her success, but was able to stage this unique solo exhibition in Hong Kong, and preside over the events for a weekend in late February. 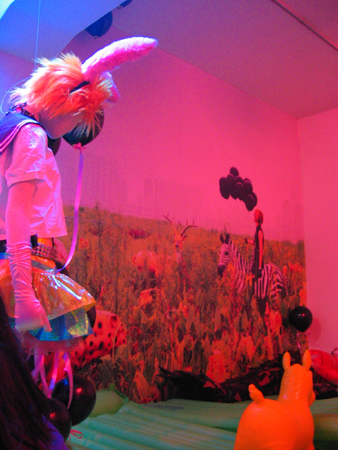 Her best known work (perhaps the “It” piece of contemporary Chinese art at the moment) is “COSplayers”, a set of videos and photographs documenting real-life teenage “Costume Players”, acting out stylized fights and dramatic quests against the backdrop of the rapidly-expanding cities of Southern China. 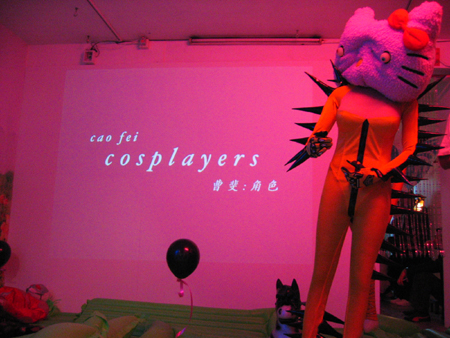 This work has been shown in various incarnations in many exhibitions, but for the Para/site show, Cao created a thematic environment from which to watch the videos and view the photographs-inflatable air mattresses covering the floor of the gallery, balloons stuck to its ceiling, hanging beads, and most importantly, a half-dozen life-sized mannequins dressed in incredibly unusual “cosplay” outfits. A Sailor Moon figure with bunny ears, a Darth Vader head atop a Bo Peep body (complete with Freddy Krueger hand), a Hello Kitty dressed in a Bruce Lee/Kill Bill-style yellow jumpsuit. 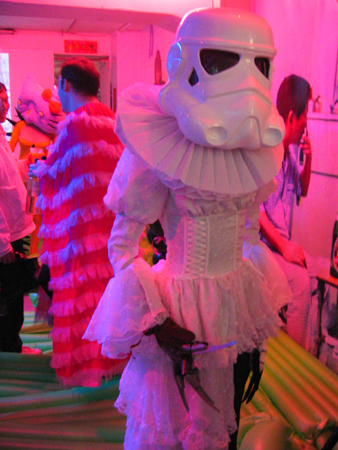 Then, in the back rooms, her other works like “Hip-Hop” (which features people on the street dancing to hip-hop music, and has now been filmed in Fukuoka and New York besides Guangzhou) and “PRD Anti-Heroes” (a visually-overwhelming play she directed for the Guangzhou Triennial in 2005) screened on walls and televisions, surrounded by appropriate “Pearl-River-Delta”-detritus such as red-white-blue-fabric, old men’s shoes, and cheap plastic chairs.