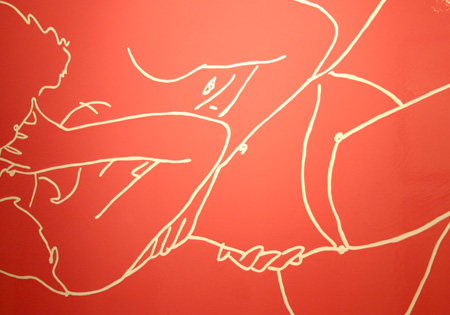 Pin heels, pink panty, and silver painted camisole, a girl wearing them are trying to change a bulb. That’s the cover illustration of “HOW TO WALK IN HIGH HEELS” by Camilla Morton, which have been piled up at most book stores and even select shops as well. Those half naked or fully naked girls, NATASHA LAW draws, capture us and make us stop in front of them for a while.
To begin with, being naked has some resemblance to being simple. If you are alone, it can be pretty relaxing, private time. Like the girls in Kaori Ekuni’s novel, you might take a bath to your heart’s content, later on repedicure yourself.
Being a grown up lady who has certain laid back, private time, that’s why those girls in her works look darling and sexy. In addition they must be loved by those kind of girls, I guess. 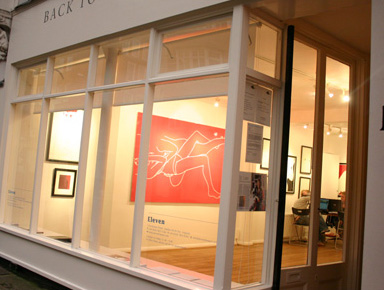 ELEVEN, art dealer Charlie phillip’s new gallery near Knightsbridge, has Natasha Law’s first solo exhibition. Just past the post office, you already can see vividly pink aluminum panel thorough their window. The exhibition, called HOLD is fringed by images of man and women hugging embracing each other, which is exquisitely cropped. 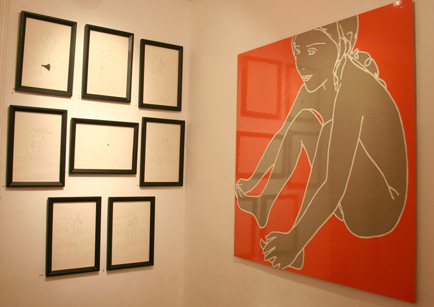 Being naked when you are with somebody, it must be special moment for both of you. Those drawings catch the moment of caress also include intimacy, seduction, and relationship between them. It must remind of you your own private stories sometimes. Her works don’t look like just romanticism, nor pornography. It doesn’t go to emotional nor sentimental. It is drawn with simple lines and colors. It may whisper to someone who has ever embraced someone else, about the affection beneath them. 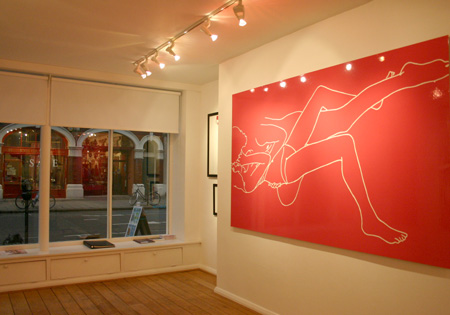 To reply SUNDAY TIMES interview, Law said “I wanted something that would appeal to men and women, something non-threatening.”

Laura Parker Bowles, co-curator of ELEVEN also said in this paper, “People aren’t intimidated by her art. It’s so simple and accessible- you don’t have to sit back and think too much about it. Mostly women are buyers, but a painting by Law is like a ‘Kate Moss’-it’s sexy to both men and women.”

According to the interview, her glamorous fashionable inspiration came from her experience in backstage of a fashion show. She started going to her mother’s friend fashion shows and collected images of half dressed models.

Very personally though I feel like her works fit in someone’s private room rather than being in a gallery. It may tell of her own values or the lifestyle itself. Access fashionart.com, which her film star brother Jude Law supports as well, it may come true that one of her works gives your room a little bit of idea.