Starting in 2003, this year’s third festival directed a spotlight on young sensitivity and art connected to the progress of technological advance. 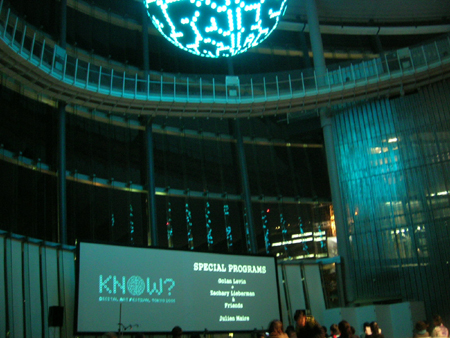 One of the venues, Panasonic Center Tokyo is built on an artificial island in Tokyo Bay, which has the scenery of a futuristic city including an unmanned train. It was therefore a very fitting place for exhibiting the technological creations called digital art. Before entering the venue, the excitement already emanating from the scenery led my heart to be filled with expectation for the festival.

Stepping into the venue, many of the selected works were immediately exhibited and it felt appropriate for the event to be called “festival”. Showing another concept of the festival that visitors can participate and experience, there were lots of people touching and operating works everywhere. 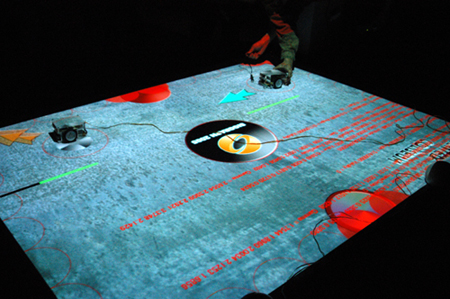 “Augmented Coliseum” by a team from Inami Laboratory in the University of Electro-Communications was a work like a shooting game that used a robot and computer graphics; a real tank robot moves around on the visuals projected, which is also connected and transformed by the tank’s movement. Both playfulness and technology are well mixed and attracted people. 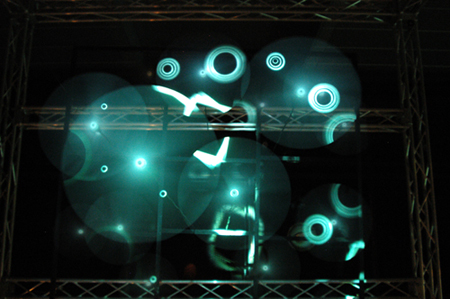 Akinori Goto’s “View Rise” is a work that projects visuals to numberless propellers hung from the ceiling. The visuals were controlled by visitors manipulating the terminal. People really focused on this work because the visuals projected on the propellers had marvelous depth and movements, and also because they had to lie on their back to look up at the ceiling.