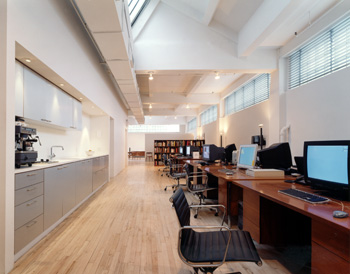 The design area of the New York office

This issue of InfoWorld in New York focusses on a Creative Design House Trollback & Co. a bicoastal creative studio whose ranks I have recently joined (now three months in). They create design for a range of disciplines, from film titles and trailers to TV commercials, environmental and architectural installations, network branding, outdoor advertising, magazine and book design to name a few, but their bread & butter work is motion graphics.

Up until very recently I was working at R/GA, the company where Jakob Trollback, Trollback & Co’s founder used to work roughly six years ago, so I’d had some introduction to his work. In his five year stint with R/GA Jakob climbed the ladder, starting as a junior designer and ending up as Creative Director for what was in its heyday one of the the leading design firms working in Motion Graphics. They worked on film titles for Superman, Alien, Mission Impossible and Seven as well as doing commercials and special effects. But as R/GA closed its broadcast doors to concentrate on Interactive design, Jakob promptly set up his own shop in 1999 to continue doing what he knew best, motion design.

Six years on and Trollback & Co. is doing well, having amassed a very impressive portfolio of work spanning disciplines, winning awards, acquiring good press left & right and having a penthouse design studio in midtown, Manhattan to call home. In addition, a 2nd office in Venice Beach, L.A. was recently opened to add more creative punch to the company.

The type of work that goes through Trollback, seems like it’s wide open despite the recent emphasis on one particular job for CourtTV, a cable channel who were in dire need of a complete re-branding package to liven up their image. Despite attention from all parties to nail that job, at least since I’ve been there it seems that anything could be possible with the focus the company has and the expertise that’s there.

For me taking on a job with Trollback was a necessary leap of faith as I became increasingly frustrated with working within web & interactive design. I’ve long been interested in motion design but my animation always felt a bit short changed by the limitations imposed by the world wide web, mainly because of bandwidth issues. There was also the fact that the tools available to create animation over the internet, largely Flash, is such a clumsy and restrictive tool to use. Now, however, anything seems possible with full motion video as a platform which truly supports any idea that you can dream up to be realized without having to wait for it to download!

Renderings for an eight story public lobby space in Seoul

Jakob himself has been known to regard animation as a fascinating medium to work with which can draw inspiration from any number of sources, not just design books. His passion for music has been noted as a clear influence on his approach to the way things animate. “It’s how things move and groove, listen to Captain Beefheart”, Jakob suggests. “That will tell you everything you need to know about animation. It has syncopation, it’s unpredictable. If you listen to it and think in pictures, you’ll understand what animation is all about”.

Three months into the job and it’s hard not to feel at home here, the culture seems healthy with the usual pranks, music and Ping Pong to keep it flowing. But it’s also because of the collaborative nature of producing the work, there is a healthy dose of creative criticism and
sharing of ideas during the process which makes it hard to be excluded. Another factor is that everyone is from very diverse backgrounds culturally and professionally. It was jokingly mentioned in passing that “it’s like being at the f***ing United Nations”. For a small company it’s got it’s fair share of settlers, including Jakob himself, who hails from Stokholm in Sweden. At the time of writing there were the following nationalities
represented in the New York office: Swedes – 2, British – 3, Australian – 1, Turkish – 2, Swiss – 1, German – 2, French – 1, Canadian – 1, U.S. – 4.

I asked Joe Wright, Creative Director with Trollback why there’s a large international contingent that make up Trollback, he told me that “it’s not by design…people from outside the U.S. gravitate towards here because of its strong European design sense”. It definitely doesn’t do the company any harm as clients seem to respond well to the clean “European” style of work that has become a trademark of Trollback.