A performance unit called Sal Vanilla, whose theme is to show a contemporary communication reality by performing a spatial presentation combining a sound, visual, body, and technology together, presented an art collaboration event “Vanilla Sports Vol. 1” at Super Deluxe in Roppongi, which is a multi-purpose space with cafe, bar, and gallery. The event got its idea from the Colosseo, Roman ancient structure. Other than members of Sal Vanilla, various artists from diverse fields performed with a sound, visual, and body. 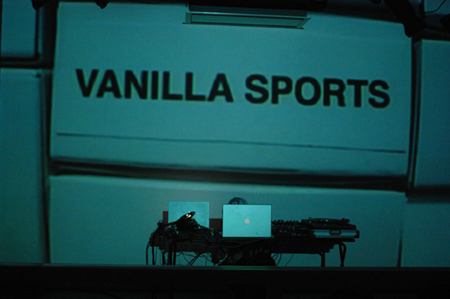 A white balance beam set in a relatively larger space appeals its existence as today’s stage set. It started with a beeping sound like a signal sound wave and the sound went away over the uncrowned hall. Thought it was quiet beginning, it enough appealed its start and moved on to a stoic sound performance by Takaaki Matsumoto. 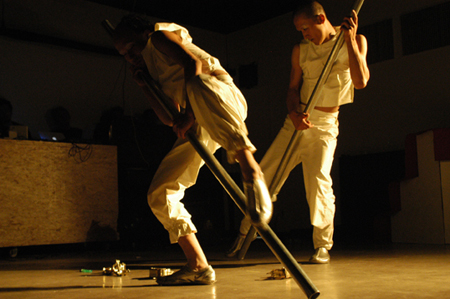 The next was a live performance by Cotra Nitra. The performance had an uplifting feeling with three people using pipes, but sort of neurotic. This performance woke up every brain of all people there which fell into a slumber by the performance of Takaaki Matsumoto. 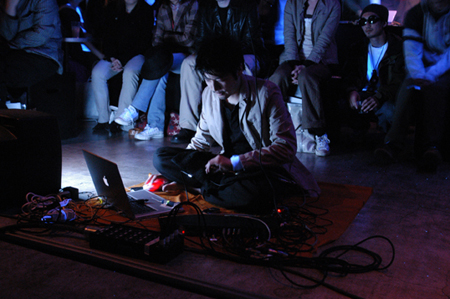 After these two performances, an audio visual live by Sal Vanilla appeared on the wall of the subterranean space in Roppongi shrouded in a bizarre atmosphere by the first two performances. Sal vanilla performed based on their theme, “city” in the audio visual live, wearing futuristic white suits. Its sound was by Yuta Kumachi who plans to release his album on a near day from a new label WC-Recordings which has conceptual and good quality techno music with Kloma’s graphics. A taste of a kind of up-front click house with a movement of good sense hihat and well cut up visuals were changing the downward hall into nice groove little by little.