Claudia Wu is a New York based graphic designer and art director. She got her start doing art direction and design at Visionaire and V Magazine followed by stints at Harpers Bazaar and Prada Beauty. I spoke with her about her latest project Me Magazine. What makes ME special is that each issue is devoted to getting to know an individual in a creative field through their own eyes as well as their relationships with their chosen friends and colleagues. Ultimately, we hopefully glean a unique perspective on a life in progress, and are able to celebrate the bonds and interpersonal relationships that enrich and enhance our own lives. 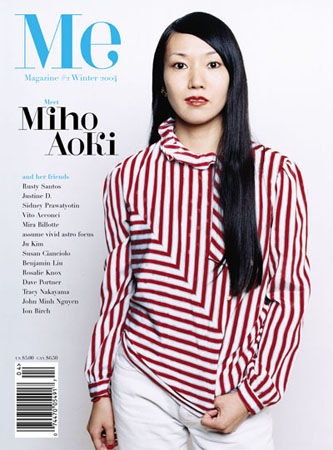 What is ME magizine? Who’s idea was it first?

Me Magazine is a quarterly publication that focuses on getting to know one person each issue.

Well, the idea came about because you always tend to run into the same people in New York, and I was interested in getting to know them on a more personal level. I also really think that there are people that wouldn’t ordinarily get press who deserve recognition for what they do. 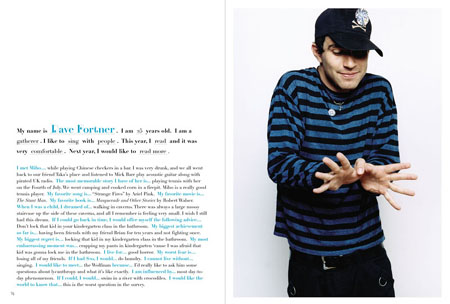 So how did you go about choosing the first guest editors: painter Josha Abelow, fashion designer Miho Aoki of United Bamboo and Chris Bolan of V Magazine?

I originally asked two people to be the first guest editor; Josha was the only one who responded! I was quite surprised that he said yes, actually. I went to school at RISD with Josh, but we didn’t know each other well and he had never seen my work! But I love that he was so easily talked into doing it. He had complete trust.

Miho we chose because we needed a girl. My friend Michael Bullock suggested her, and she was fantastic. I have a lot of respect for her after getting to know her.

Chris I worked with at V Magazine and he was someone I had always wanted to do since the beginning, but he’s also very shy, so it’s taken a while to talk him into it. He’s such a great writer, though. He’s going to be the new Editor-in-Chief of V Magazine and he’s writing his first novel. 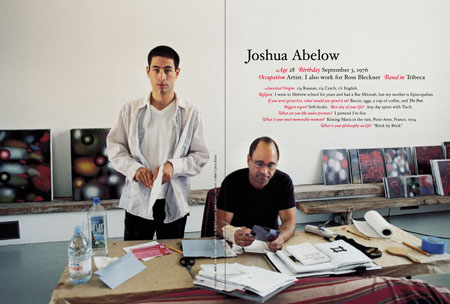 So you worked at Visionaire? Can you tell us about your background in brief? What inspiration (if any) did you take away from that experience or others? How does your magazine fit into the greater world of NY independent
publications?

Yes. I was associate art director at V Magazine for two years, as well as being a part of the Visionaire design team. Looking back, it was a great experience, but I was so burnt-out by the time I left. I didn’t take a single vacation the entire time I was there, so I was dying for time apart. I don’t regret leaving. After that, I freelanced at Harper’s Bazaar, was Art Director at Prada Beauty, I just finished freelancing as an art director for the spring and summer Gap campaigns, and I’ve been the design director for Index for over a year now. I think I’ve been really lucky in terms of jobs, and I credit working at Visionaire and V — it’s very nice to have them on my resume. Ultimately, it’s the work that speaks to people, but at least it’s a foot in the door. Also, since V was such a small group, I really got to see the inner workings of a magazine. I learned a lot of lessons and practical things that I was able to use when I wanted to start my own magazine.

I think the magazine stands out a bit in terms of the greater realm of NY independent magazines, purely because it is so concept driven. It’s really about people, not objects, fashion, or images. I know newsstands are constantly flooded with new publications, but hopefully, this magazine has a unique voice that will resonate with people. I can understand why magazines come and go so quickly after doing my own magazine, though. You really need to love the process and be completely committed to it.