Soso Cafe in July hosted the solo exhibition of Imaitoonz, whose career as an illustrator reaches 10 years this year. He recently opened the door to a new direction by producing the film “DEADLEAVES” (distributed by Shochiku). He has held exhibitions at Soso Cafe twice before. This time, on the opening day, he entertained us with his energetic and speedy live drawing. 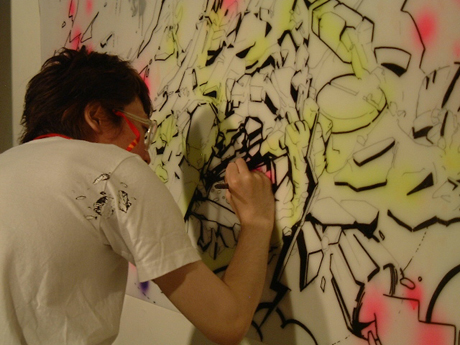 At the entrance of Soso, an impressive illustration on a pure white wall by Imaitoonz welcomed us. It was drawn the day before of the opening without any preliminary sketches by him. It might not be unusual, but I was surprised that he was able to draw such high quality work in one go. 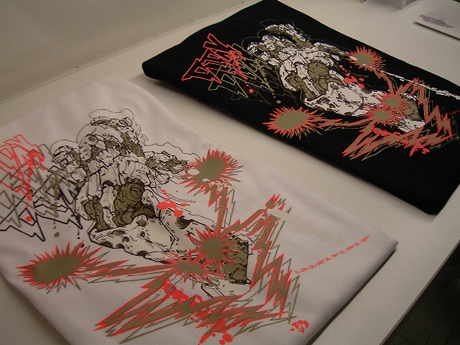 Since this exhibition is also a kind of celebratory exhibition for the release of the “DEADLEAVES” DVD (released on July 24th), a film screening was scheduled in addition to his live drawing performance for the opening event. Also in the showcase, exclusive T-shirts designed by Imaitoonz were displayed and sold. 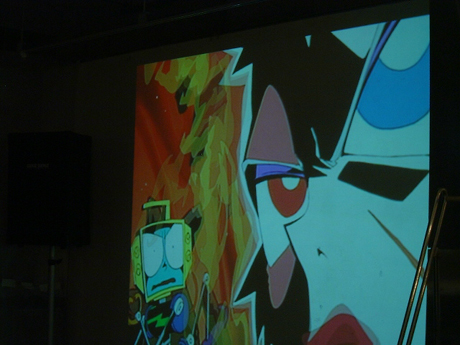 “DEADLEAVES” is a feature film produced in collaboration with internationally renowned animation production, Production I.G. and Imaitoonz who has been invited to several international film festivals and started showing his existence in motion works field. Pop and powerful characters, in which his originality is strongly reflected, develop the story at a breakneck speed. If you look away from the screen a moment, you would feel as if you are thrown off from the rushing story like a roller coaster. The duration is about 55 minutes but I felt that it was much shorter after being overwhelmed with its non-stop action.