BB3 – The 3rd edition of the young Berlin Biennial features fifty artists presenting visual, architectural, cinematic and sonic art works inspired by Berlin, facing its 15th year since the collapse of the wall and the city in which many of the artist live and work in. Berlin’s heterogeneity, its past, its future as the new capital – specifically in the context of urban restructuring – and the subcultural and critical stance derived from these elements are presented in two separate venues: the edgy KunstWerk, a former margarine factory in Mitte, and the more classical Martin-Gropius-Bau in Kreuzberg. 30 films will also be screened at a third venue, the Kino Arsenal on Potsdamer Platz. 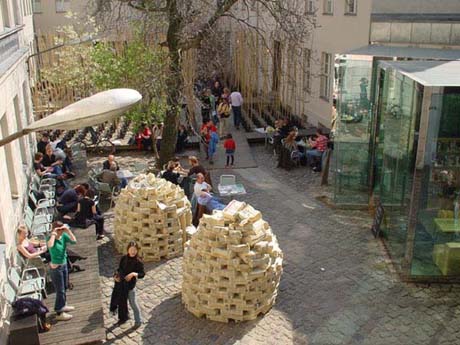 It was one of the first good days of the year. If you’ve ever lived in this city you’d know, Berlin transforms into another place altogether when the sun is out, and the courtyard of KunstWerk was no exception. The cafe, normally housed safely in Dan Graham’s glass structure, had miraculously produced enough garden furniture to accommodate the sunglasses-clad guests relaxing in between wandering through the 6 floors exhibiting perhaps half of the fifty artists taking part in BB3. In the middle of them stands two piles of bundled newspaper, part of Akira Suzuki’s contribution; igloo-type structures where one can enter through an opening and, presumably, squat. 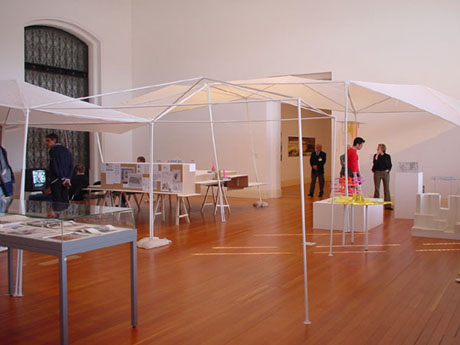 Suzuki’s structures are linked implicitly to the “Urban Conditions” hub, one of five themes around which the biennial has been loosely based: Migration, Sonic Landscapes, Fashion and Scenes, and Other Cinemas, to name the other four. Like a computer network, these “hubs” aim to connect the diverse cultural and contextual works and ask questions about their content and relevance.

The hubs also include historical references, inescapably important when trying to understand Berlin today. Jesko Fezer and Axel John Wieder of the Urban Condition hub say, “Societal, political, social and cultural power relations manifest themselves in cities in the form of architecture and its use as well as in the associated histories, negotiations and conditions of feasibility. Anyone who knows about the history of the trend towards the privatization of public space that has taken effect in Berlin since 1990 will view many sites in the Mitte district with some scepticism. Anyone who knows about current techniques of surveillance and security planning will move about Potsdamer Platz rather more warily. And anyone who has followed the changes in communal politics over the past ten years will be less surprised about polarizations of social space in many parts of Berlin.”