The area of Holloway in north London is not a prime location for tourists. Famous for the Holloway Prison (the only all-female prison in UK), the Holloway Road that runs down the middle of this town is also a haunt for immigrants selling illegal tobacco. The road is constantly heavy with traffic and the streets are lined with kebab shops and factory outlet stores. 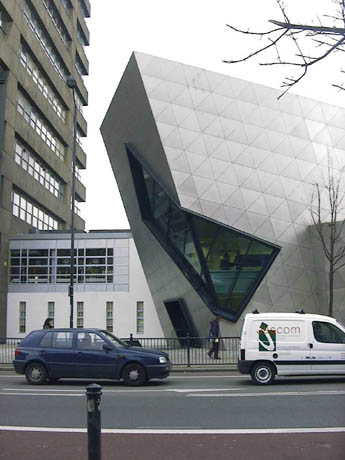 If you dare to count the merits, the buses will take you to Camden Town and the fashionable Angel area in under ten minutes and cheap households goods are on sale at the weekend markets. Recently though, Holloway has been in the news for its new and unexpected new resident… 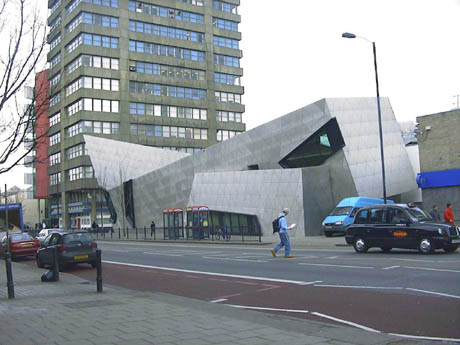 The Graduate Centre, London Metropolitan University opened officially on 9 March 2004. It was designed by Daniel Libeskind, the world famous (originally from Germany) who carried out such projects as the Jewish Museum in Berlin, and currently working on the redevelopment on Ground Zero in New York in the aftermath of 9/11. 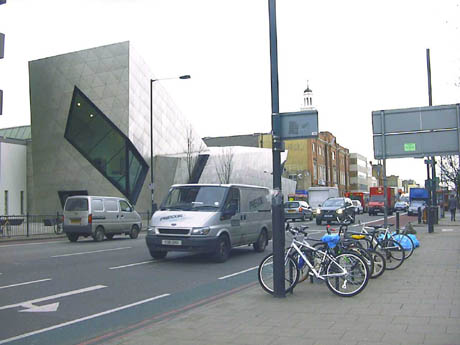 Holloway Road in the afternoon, heavy with traffic and the Graduate Centre

This building, named the ‘Orion Project’ is a structure with three intersecting blocks and the large geometrical windows provide natural light into the lecture hall, three seminar rooms, offices and cafe for the staff and students. The exterior is covered in embossed stainless steel panels. The tall buildings on both sides of this architecture gives the impression that the Graduate Center is squeezed into the space in between. The futuresque design of this building is eye-catching and you can see the blocks stretching out above the streets. However, the passersby and the traffic seem to be indifferent to this piece of art by such a renowned architect.