This exhibition is by Keiko Miyata, an artist who creates wonderful and strange stuffed animals. Following last year’s exhibition “IN&OUT“, Soso Cafe was filled with cute and scary stuffed animals. The exhibit’s opening featured Keiko’s live painting and a live performance by The Analog Girl, a musician from Singapore, performing in Japan for the first time. 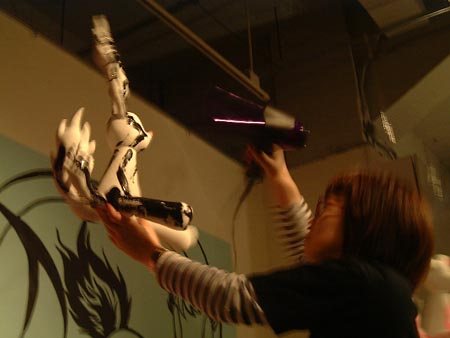 Before the event started, pure white teddy bears and pink bambis sat in the middle of Soso Cafe as if they expected something would happen. 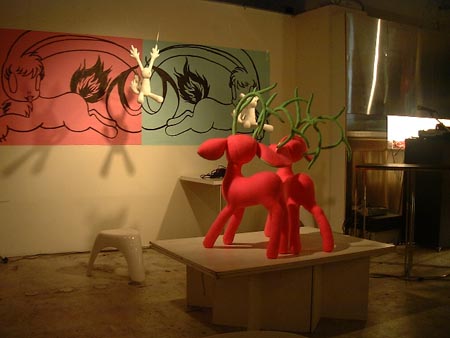 When the venue opened, excited attendees enjoyed the atmosphere, eating and drinking. Around the time that they wondered when the performance would start, Keiko appeared. She stuck vivid green felt parts to the pink creature’s body, establishing patterns and checking the balance from several angles very carefully. It was as if she was giving life to them. When they were completed, she held two of them under her arms and showed them to audience. 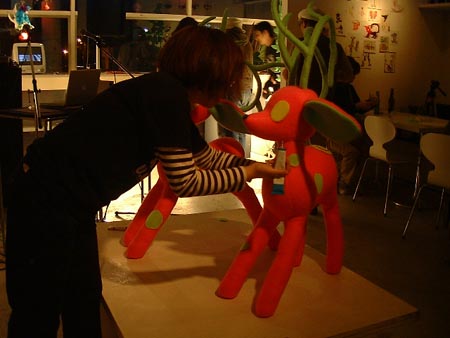 After that, The Analog Girl from Singapore gave a live performance. When she took the stage, her fashion, hair style and makeup were very stylish and took everyone’s attention the result of make up artist, Miwa Yokoyama and stylist, Rumi Kojima. The two are going to hold “Thanksgiving Makeup 2” – a collaboration with make up and motion graphics- on November 30th as one of a related events of DOTMOV festivalheld at Soso in November.