The highly anticipated “Silence sonore” at the Palais de Tokyo is the first major show at a parisian institution devoted to the chinese artist Chen Zhen. Chen Zhen was born in Shangai in 1955 and France as his residential country in 1986. He died prematurely in 2000 due to an incurable disease. Chen Zhen regarded himself as an international artist. He made his artistic reflexion with his worldwide education : east plus and across west.

This tribute to Chen Zhen in France occurs in conjunction with the “Annee de la Chine”, the China’s Year. While ironic, it’s not a game of chance! 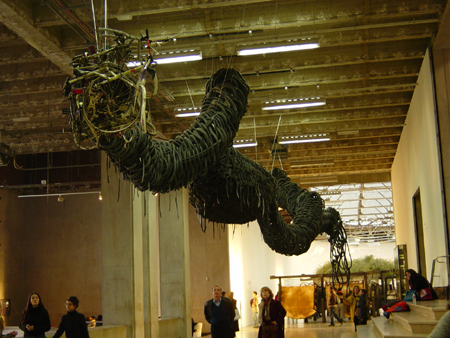 It is happening 2 years after the opening of le Palais de Tokyo, a museum for contemporary art, where Chen Zhen came in 1999 as the first artist to work in the site and think of a big show in it! At last we can see 13 of Chen Zhen’s monumental pieces. A retrospective of his work which is remarkably appropriate for the place.

Three major lines around the human being form the structure of the show :

– Mankind’s connections with object and nature. Pieces like “Precipitous Parturition” offer a critique of a materialist world and the systems of consumption as dominant models.
– Misunderstanding between humans and the theme of reconciliation. Pieces situated in the field of political critique.
– Meditation and therapy, which lie at the heart of his work. He’s questioning the relationship between the doctor, the patient and his disease. Zhen actually began the process of becoming a Chinese doctor which resulted in a form of philosophical and artistic investigation. Zhen sees the artist as a therapist for himself and more globally for society. 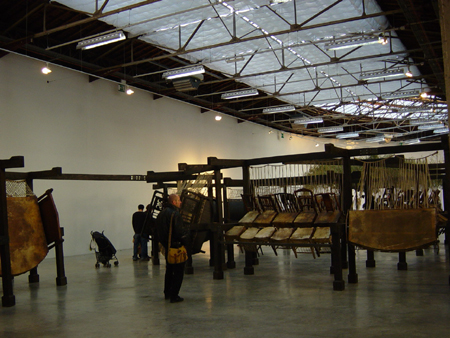 The piece Jue Chang, invites one to experience the violence of striking a chair and bed hidebound like a drumhead. It shows the desire of “doing things with a therapeutic sense” (for the public). 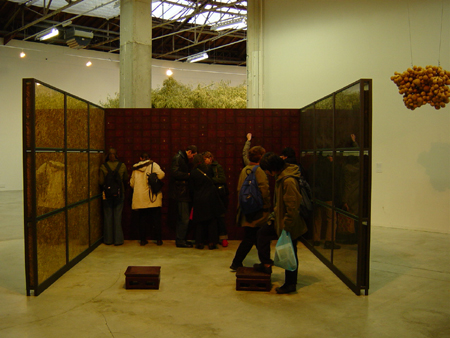 The waiting room in doctor Zhen’s dream office, presents 100 different medicinal herbs… Chinese medicines anoint a large place to diagnosis by test, observation , olfaction and audition, then palpation. Including this philosophical approach to his preocuppation, Zhen claimed “to be concerned with diagnosing the illnesses of the world”. 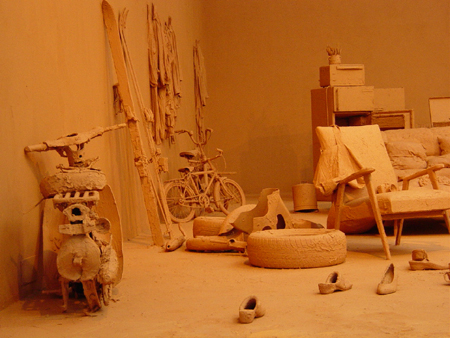 Purification Room was created in 1991, and realized in Palais de Tokyo with Chen Zhen’s wife and assistant , Xu Min. Zhen introduced this piece like a “monochrome tomb.” With the pharmacopoeia and surgery equipment he uses a lot organic and natural materials (sand, wax, clay, alabaster, stones, wood, leather…) which add to the testimony of industrial society hither and thither in the works.