Imaitoonz and Yutanpo Shirane were the stars of Dotsoso#19 this August. Loyal readers of Shift know who we are talking about. Both have already been to Sapporo. Imaitoonz visited us exactly one year and Yutanpo two months ago. Since 1995 Imaitoonz, working as an illustrator, has done works for “Top of Japan” (MTV), character design and official illustration and poster for Sega’s arcade game “Fighting Vipers 2”. He also showed his original animations at the Rotterdam International Film Festival and Resfest 2000 just to pick out some of his achievements. This time he had Yutanpo Shirane as a collaborating guest artist at the opening event for his exhibition, “Response to War”. Yutanpo Shirane, from Tokyo has been successful as a freelance illustrator by providing illustrations to serial magazines like “Spa!”, “Anan”, “Smart”, “Nikkei Entertainment” and more. He has also had various exhibitions at galleries and published his own book “Namanuru Panorama Edition”. 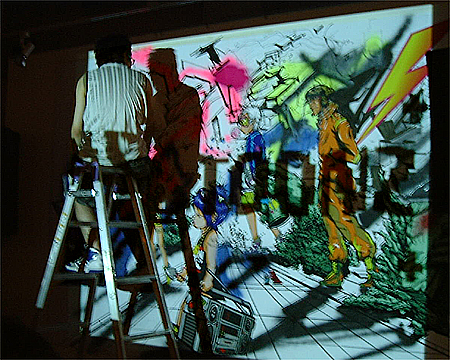 In the middle of Soso Cafe a table with all sorts of Video equipment was set up where CAD., a visual production Company from Sapporo showed a VJ performance. Thanks to CAD’s interesting work, the time until Imaitoonz and Yutanpo started their performance didn’t seem too long. 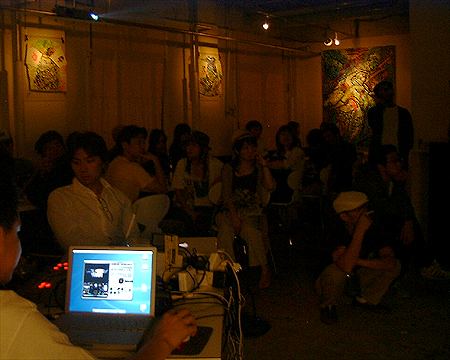 At about 10pm the white screen, that had been captivating everyone’s attention, was ripped off to unveil a canvas already illustrated with Imaitoonz cartoon-like characters. With quick and confident strokes Imaitoonz gradually filled the empty part of the wall with his unique figures and graphics using thick marker pens and spray paint. 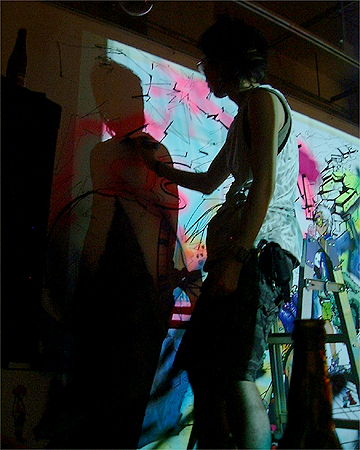 Yutanpo was sitting in front of his iMac and projected his self-made graphics and video clips on the screen while at the same time Imaitoonz was painting his graffiti. Well it looked like graffiti but it was much more complex to what I’ve seen so fare as urban art work goes. His style is a kind of mixture between illustration and graffiti.