We have Interviewed some of the artists that have participated in this 3rd edition of the OFFF Festival in Barcelona, specially for the readers of Shift Magazine. It hasn’t beeing an easy work to do, we had three days of non-stop activities, much of them happening all at the same time in the Mercat de les Flors where all the designers, digital artists, musicians, publishers and architects of the image got together to share experiences, some from work, some from life itself, and have a great time as it’s becoming usual in the OFFF Festival. 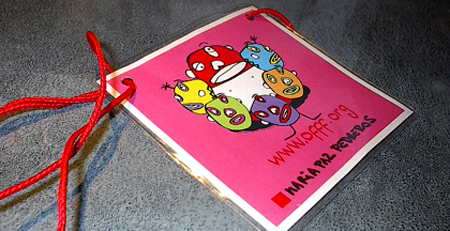 D76 Press contributors for Shift Japan in Barcelona-Spain worked also inside the production team of the Festival, thing that allowed us to be next to all the people starting from their arrival at the Barcelona Airport. 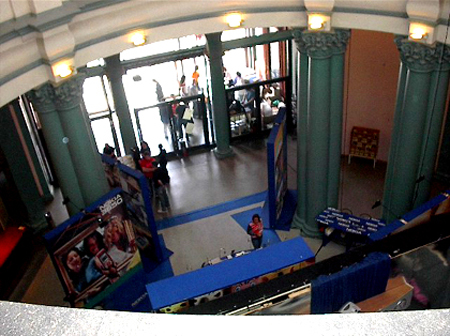 The Mercat de las Flors (“Flower Market”, in Catalan, the home language of Catalunya, this region of Spain) has been the greatest place where the OFFF Festival has been presented so far. It’s a huge place, with three floors, some conference rooms and a 300 people’s capacity Auditorium, where all the main conferences took place. The OFFF will be a part of the Forum de Las Culturas in Barcelona next year 2004 and the Festival will be presented again at the Mercat, where you can find normally other kind of activities as opera, theatre plays, Contemporary and classic Dancing, film festivals, between many others. It’s a space provided by the Ajuntament de Barcelona and property of the Institut de Cultura de Barcelona (ICUB). 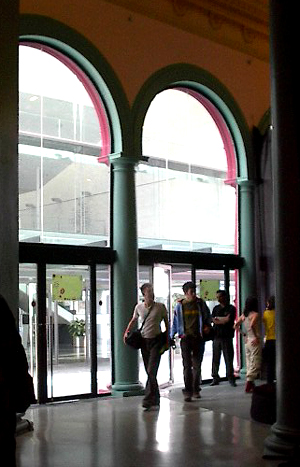 The building was originally a part of the Agriculture Palace in the Universal exposition of 1929, and later become the Mercat de les Flors, housing a real market of flowers. 74 years later, the Mercat opens it’s doors for the OFFF Festival 2003. 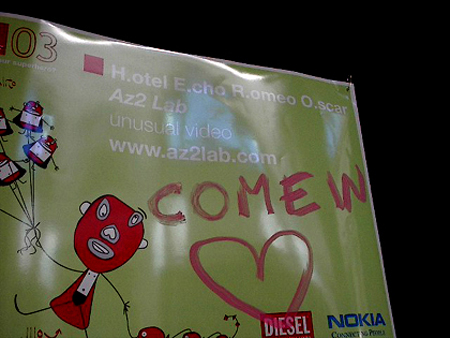 Even it all started the night before with a little welcome party, it wasn’t until Thursday when it was all ready to start with the conferences and the shows. All of us were nervous, anxious concentrated to give our best effort to make all the presentations and shows the best that they could be.

The main theme this year was “WHO IS YOUR SUPERHERO?”. Some of the conferences used this topic as a main point of the show, like AZ2-Lab and Erik Natzke, and they gave us all a good thing to think about this times heroes. This year the Festival made a record of visitors, that were about to see the works done by more than 200 “heroes” that came from Spain, Canada, The United States, Sweden, Belgium, Japan, The United Kingdom, Australia, Portugal, Mexico, Italy, just for mentioning some.