Emotional sincerity charges the gear of Sao Paulo natives OSGEMEOS‘ art but where they come from is no candyland. The tough reality of Sao Paulo is deep in their veins where even the police shy away from hard core crimes and prefer to harass graffiti artists. Twin brothers grew up sharing everything from cloths, fixation with fire, and love of drawing and painting. 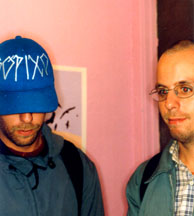 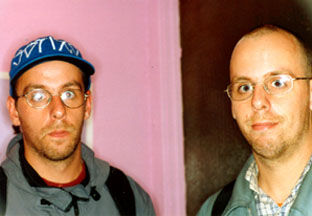 Suggesting the idea of play, fire is a recurring theme throughout their work. “Everything has a story, everything has a reason,” OSGEMEOS encouraged to seek the narratives behind each work. “We mix many different elements. Firecrackers, rose, love, hate, dreams, fantasy, and stupidity.” Their spirits are always of a child at play. 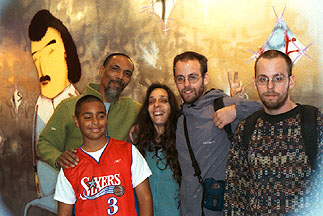 The twins make art as one unit. No communication is necessary while creating; they both know exactly what to do without a word spoken. “We are into same things, so we do the same thing.” Their immense study of hip-hop culture and NYC’s traditional graffiti scene since the age of 10, making the street their canvas was a natural move for the prolific pair.

They have since made murals the size of large buildings in many cities throughout the world. At the time in Sao Paulo, in the late ’80s, making art on urban street was still a rare act. Yet they exchanged techniques passionately with other writers in the city whenever possible. OSGEMEOS refer to that time as “taking in too much different information,” and soon move on to develop their own style. Bold use of color, intentionally splashed outlines, stencils dealing with socio-political narratives, their art is a mixed beauty of paintbrushes and rollers as well as spray cans. 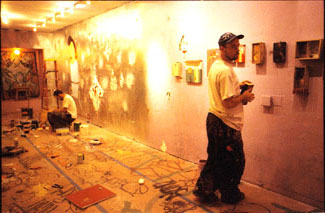 It was 1993, when Barry McGee and Margaret Kilgallen encountered one of OSGEMEOS mural in Sao Paulo. Phone number accompanied the mural as to receive legal work and McGee gave them a call. Soon befriended, they inspired each other and painted together. Laurie Lazer and Darryl Smith of The Luggage Store gallery shared the inspiration back in McGee’s native city San Francisco upon his return. With years worth of preparation, OSGEMEOS’ first US gallery show “PAVIL” realized with funding from notable foundations. After 3 weeks of twins’ intense labor, gallery was filled with bright paint, charming characters, and firecracker scorched walls.