“Unfortunately, a platform for a pop art is not ready yet in Hong Kong. This is why I chose Tokyo as the first place to present my Boom series. Tokyo is the place where people naturaly enjoy and sometimes accept the pop art as a part of their daily lives regardless of the generations. I could feel their respect to artists there as well.”

I am sure that Michael Cheung said so when he held his first exhibition “No Peace No Boom” at Speak for Gallery in Daikanyama, Tokyo in last November. “Of course, I can see many signs of enjoying of arts in Hong Kong, too. I want to believe potentialities of these signs and hope my works will be accepted there.” 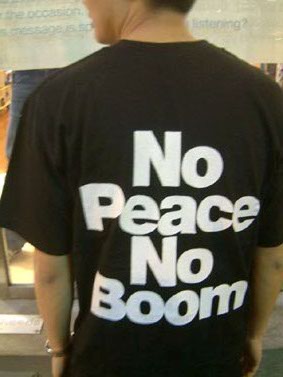 Four months later, his hope speedily came true. Followed by the exhibition in Japan, he was invited by Colette in January 2003 and he made a debut in Paris with a los of high praise. Afterwards, Hong Kong’s culture magazine Milk Magazine paid an attention to him. As the third exhibition of its’ inregular series project “Milk Gallery”, Boom Hong Kong Triumphal Exhibition was held (Polaroid Exhibition and Glyph Exhibition were held at Milk Gallery before). 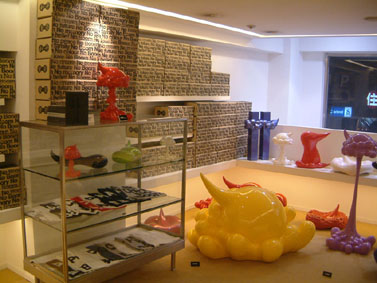 “The reason why I added a bit of functional parts (works turn to a chair or a side table by adjusting a part of them) to Boom art works is that I wanted works to have an effect that gives people familiarity like they feel “I want to touch it”. I have a deep understanding about how people accept works through my experiences in an advertisement and a design field. However, I wanted to avoid creating works that people just will be surprised and looking at them as ‘art works'”. As he thought so, visitors to the exhibition in Tokyo totally understood Boom as the art pieces. However, here I have to point up that they understood Boom as a creative work with a lot of various potentialities that can joint with diverse fields rather than just an art. 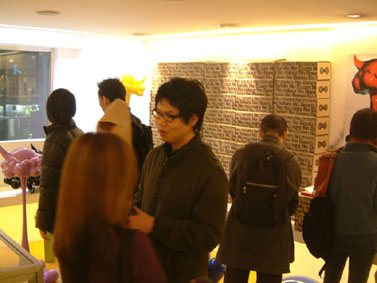 On the other hands, people understood these works made with fiberglass as a new type of functional “product” at Colette in Paris. As a result, Boom, which were displayed at a showcase on the first floor not at a gallery, found many buyers on the first day and it was a big surprise for Michael.