Harvest is the result of 7 years of work, collaborations and a collection of work by artists we admire and have worked with in the past. Harvest serves as a self-portrait, and a point of closure for me. I felt that publishing a book and putting all of our work in one graspable object would force us to move forward and produce new work. It is so easy to get stuck in the comfortable rut of a working style. So we present this book as a departure point for many new ideas and projects and as a reference to what has been done.

Harvest presents non-profit work, art projects, research material, Artist in Residency Program and a special section called Fellos which is dedicated to a dear friend and artist: the late Margaret Kilgallen. This section has an intro by Renny Pritikin, cheif curator of Yerba Buena Center for the Arts. See Below. – Amy Franceschini. 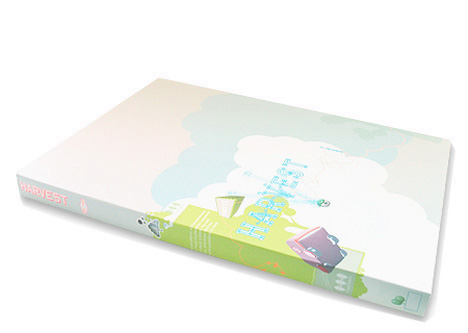 Occasionally groups of friends who are artists living in the same city come together around similar aesthetics. On rare occasions the resulting work is good enough and lucky enough that national audiences and the national press discover it. San Francisco, despite not having a great deal of media presence, has gotten probably more than its share of attention for such developments as the 50s Beat poets-Ginsberg, Kerouac, Ferlinghetti, et al, and a decade later for the 60s psychedelic rock groups the Grateful Dead, Jefferson Airplane, Country Joe and the Fish, et al. Movements that were arguably as important but never did gain mass coverage included the language poets of the 80s-Lyn Hejinian, Barrett Watten, Carla Harryman, Bob Perelman, Ron Silliman and others, the gay aesthetes of the 90s centered around Nayland Blake, the high tech artists of the 80s and 90s such as Alan Rath, Paul DeMarinis and Jim Campbell, and most recently, the graffiti/skater movement centered around Barry McGee, Margaret Kilgallen and Chris Johansen, among others.

Curators live with the terrible sense that some day-we don’t know when-we will walk into a gallery or studio and have no clue what we are looking at. I am two generations older than the artists in Fellos. I know that distance viscerally, the curvature of the earth looms up between us. How to best understand their feelings about the environment and their lives in relation to it?

I was recently in the Galapagos Islands where I was introduced to damsel fish. Each damsel fish knows every pebble and leaf in its little corner of the tide pool and will remove any object that disturbs the perfection of their orderly homes. It is tempting to speculate whether these tiny beings see themselves as responsible for a little bit of order in a chaotic universe – ie are artists – or if they assume that the universe is perfect and they are responsible for keeping their little section consistent with the whole – ie are devout. 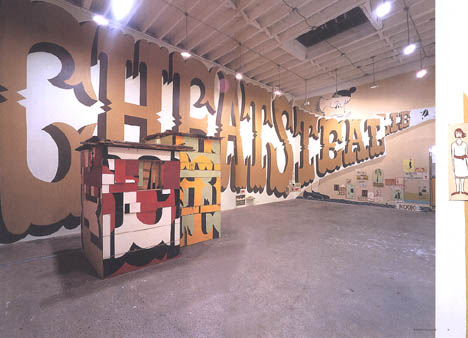 I believe that this group of San Francisco artists can be seen as Urban Rustics and Digital Bohemians. Born between 1965 and 1975, as children and young adults they have endured corporate ecoporn advertising and the simultaneous creation of the professionalization of the environmental movement. Their resulting cynicism about good environmental intentions and rhetoric is wed to an absolutely conflicting near – religious belief in salvaging what is left of a fugitive authentic world. This ambivalence is fed by the physical closeness of the immaculate Marin Headlands, peppered as it is with compromising military installations, the elusive remaining San Francisco Bay wetlands similarly surrounded by corporate land use, or the still awe-inpiring Sierra Nevada riddled with water projects.

Layered over this background is the effect on one’s psyche of daily subsistence as part of the new educated underclass, people with college degrees in studios in decaying parts of the Mission district and South of Market in San Francisco, working either the traditional artist day jobs or as new high tech serfs. The internet and digital graphic design are also a part of the landscape, standing out as something sort of clean, neither owned nor codified yet always in danger of cooptation and thus offering a human-scale parallel to a threatened ecosystem.

There is a sense of with drawal from the baser aspects of the culture’s values, a selective puritanism. Skateboards are cool and don’t pollute. Hobo culture declines careerism. Art can offer carte blanche to say anything and can’t be censored if it is on t-shirts and walls. Street style defeats materialism. A new kind of beauty is possible in the broken down and discarded, recontextualized. Move the stick to the outside fringe and declare a new center.

The operative values in these artists’ works include stinging humor, cheeky honesty, an extreme modesty of materials, a demand for empathy with nature and human suffering, and a preference for non-showy rendering skills often based on archaic or pop found sources. It’s a look: off-hand, ironic but not cynical, the half of naive that is childlike rather than ignorant. These are the aesthetic values that the painters and sculptors in this book share with Amy Franceschini.

We warm ourselves each day this unusually cold winter around the fire being generated by the Fellos artists and our heartfelt memories of Miss Kilgallen.