“In the Labor-crime history, the most tragic story is going up”. The Japanese animation “Patlabor” was released in various media (e.g.comics, TV, video and movie). The story is set in the near future where highly adavanced robots called “Labors” are used. It is about the people of the Special Vehicles Section 2 of the Tokyo Metropolitan Police Departement, so-called “Patlabors“.

After long 9 years, Patlabor the Movie III “WXIII” was released. As our real world is getting closer to the world of Patlabor, this story give us something we should consider. On 6th April, Mr.Tori Miki the scenario writer visited Sapporo to promote the film. 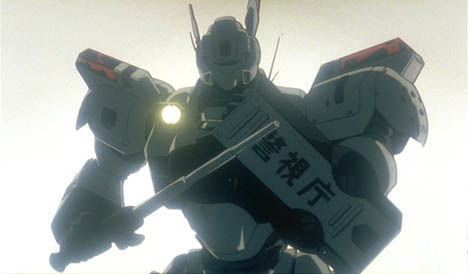 I heard you wrote this script for an original animation video (OVA) and it was changed for the movie format. Did you deliberately bring something from the previous two films into this third film?

Originally, the film would have become OVA. When I almost finished the script, it was changed for cinema. After that, I concentrated on making a suitable atmosphere for the cinema rather than changing the story itself. The script I wrote for the video was light-hearted and followed the right path to monster movies. You may say “That’s fine ” if it is OVA, but it was completely different from the previous Patlabor movies. Although Mr. Takayama (chief director) and I adopted new techniques to the effects and script, we agreed to return to the atomosphere which the previous movies had. So, we made a change for adding seriousness. Because the director, the supervisor Mr. Debuti and I made a lot of brainstorming, I don’t think I wrote a selfish script. We discussed so many times even when we decided minor things.

Do you feel any difference between writing comics and scripts?

While I write comics, I can think both of story and pictures at the same time. Thus, I can reduce explanations because the pictures tell more. But I have to explain everything with written words in script. I tended to write too much as I feel I should give more information. You may find my scripts are more explanatory than my comics.

I think the new strategy was applied to “WXIII”. Is it because of the generation gap between the director Mr. Oshii and you?

It’s not the generation gap but Mr.Oshii has strong feelings that he lost his home town. He was growing up in Tokyo but today’s Tokyo is completely different from what he used to know. He tries to demolish or dismantle present Tokyo or the Japanese system which are full of deceptions. Mr.Takayama and I cannot do that because we are from Kyushu and we don’t have those feelings. However, I believe people from outside Tokyo feel something about it. Mr.Takai expressed his thoughts about Tokyo in this film. I didn’t do that on purpose in the script but the visuals can tell.

Mr. Oshii usually uses rhetrical long dialog but we agreed to reject over-conceptual dialog this time. For example, when a monster appears in a scene, a character says ” Oh my god! That’s a monster!”. This may be the easiest way to be understood but we did not do that in this movie. Even to mention the use of music and sound, Mr. Kawai made them simple. I suppose there are many people who follow the dialog but not the visuals. Unfortunately, they may be confused with this film.