In February 2001 Me Company was approached by Park Avenue Productions to work on an exciting new project for their client General Motors. It was an ideal first project for the newly created division of Me Company, called Chromasoma. Chromasoma is a dedicated character design and animation studio. The brief was extensive, to create an animated ride for their “DreamChaser” technology which would be installed in the EPCOT ® themepark in “Walt Disney World ®“. The “DreamChaser” is a force-feedback chair where the audience experiences the film on a personal audio-visual headset while the chair is in motion. 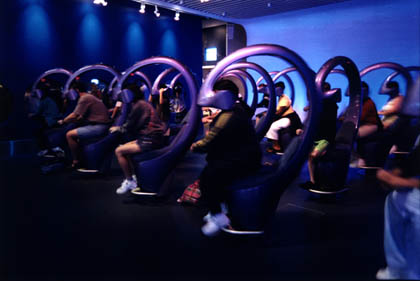 The film was to feature 2 characters, Gena and Mo, and a number of different environments extolling the virtues of GM’s innovation driven research and development process. Park Avenue were attracted to Chromasoma by the visual strength of their character design and the modern look and feel of other character driven projects for previous clients such as Sony Playstation.

‘We chose Me Co because of their mix of contemporary design style and old fashioned storytelling. We knew we had given them a very tough task, but they delivered with a brilliant team, great passion and creativity. It was an inspiring experience to work with such a talented group of people.’
Quote from Henry Peplow, Creative Director, Park Avenue Productions.

They also appreciated the budget-conscious and flexible boutique-orientated service that they felt we would be able to offer. The project was an enormous organisational undertaking with many external subcontractors working independently on various aspects of the technology and implementation of the DreamChaser ride. It was imperative that the development path was dynamic and able to respond to changes and client ideas throughout the lengthy production period. 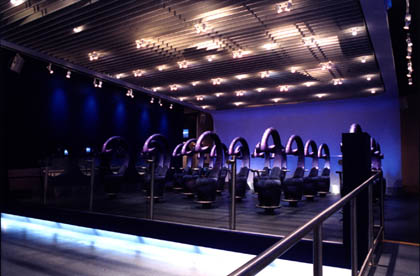 The full extent of the brief included site specific graphic design, signage and the creation of a brand identity for the “DreamChasers” technology.

The design process needed to be started somewhere. It was decided that the characters would be developed first and by doing this we would establish a visual vernacular for the whole project. As usual this was one of the best, most fun, parts of the job. Working closely with Paul Garner, Chromasoma went through many, many iterations of character ideas. Presenting ideas weekly to Park Avenue, and of course, the GM clients. In a couple of weeks the drawings were settling down and everyone was feeling comfortable with the direction we were following. Once these were signed-off we moved to Softimage and built the characters from scratch as digital models. They were rigged for animation in XSI and given their textures and surface properties. More presentations followed and finally the digital characters were approved and ready to work with. 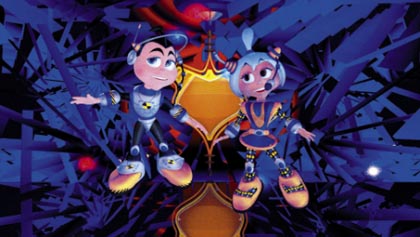 While all of this was going on, the rest of the Chromasoma team was producing concept drawings and computer visualisations of the environments that the action was going to take place in, and simultaneously developing logos, signage and other graphic components for the space where the chairs were going to be deployed. There were a total of 6 spaces designed in all, including a wild west scene, a beach scene and several other fantasy spaces that made up the “Dream Highway”. 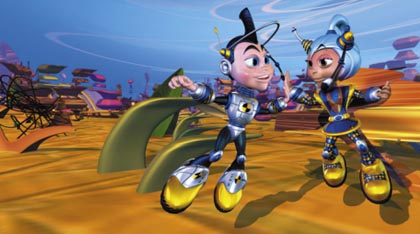 Chromasoma teamed up with creative partners Digital Ammo for this project, they were the principal character animators and were also responsible for the motion path that the ride follows. They were justifiably nervous of the short deadline (3 months) but worked fantastically throughout to overcome problems and suggest clever solutions wherever humanly possible.

As the final script was being recorded, and Chromasoma was designing the look of the characters and some of the sets, Digital Ammo worked with Park Avenue on an animatic that would be the guide for the whole project.

One of the most unusual aspects of the project was that the content of the film was strongly dictated by the abilities of the chair to make people feel immersed. Both the Chromasoma and Digital Ammo teams have plenty of experience of “conventional” film making but this was something very new for all of us and we had to rethink all the strategies to come up with something that was perfect for this highly specific usage. 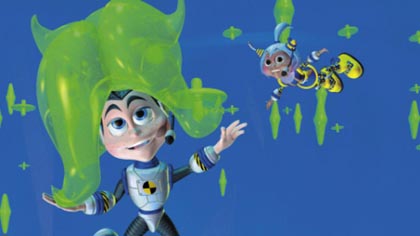 Digital Ammo, with character animator Petria Whelan using Softimage XSI v1.5/beta v2 and a first draught of the voices produced several animatics, which defined the movement of the camera through the CG environments, the movement of the characters and the position of special props used in the movie. The environments and character animations were literally wrapped around the motion path that we’d developed for the chair. Counter-intuitive but very successful. 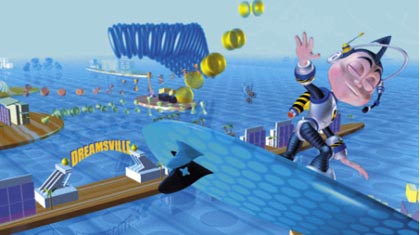 When Chromasoma provided Digital Ammo two finished characters for the project, the final voice and audio tracks were still not ready. We were working with provisional versions recorded in the UK, the real voice talent had to be genuine American. 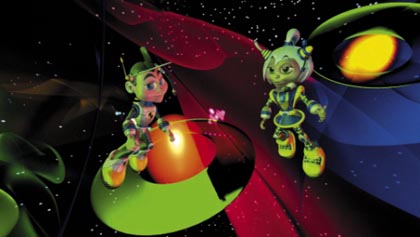 Anyway, to save time and use technology to our advantage Digital Ammo wisely decided to use Kaydaras ‘filmbox’ v3 and its voice reality2 to produce a quick lip-sync for the characters.These were then taken in to xsi via the older version of Softimage 3D. This enabled us to work on the rest of the project and not worry too much about the lipsync which had become a semi-automated process.

When the final voices arrived they were applied to the model heads in filmbox then brought in to XSI . where the fully animated characters had several basic moves stored, using the animation mixer we were able to add moves i.e. swimming actions etc and talking heads. 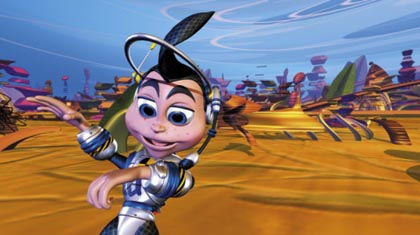 Once each characters scene was completed Chromasoma took their lighting from the sets an applied it to the characters. Using XSI’s Render passes several layers were produced for the composite.

The project was a very ambitious one for the deadline without Softimage XSI and Kaydrars Filmbox Digital Ammo would have not completed the project on time.
The final render passes and compositing were done at Chromasoma’s studios.

– This is a press release from project “Chromasoma” in Me Company.

Text: Alistair Beattie from Me Company