By chance the land on which this building was built – situated in the historic centre of a small Tyrol town – had the same proportions as the New York project: 7.60m wide with a depth of 36 metres, linking the main piazza of the city (towards the south) with a parallel road (towards the north). The design was made up of two distinct facades and the possibility of accessing the bank office from both parts of the building. 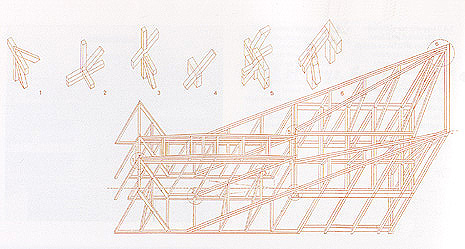 Bank at Lienz Drawing, An architectural sculpture in a medieval area (1993-98)

Towards the main piazza, the design blends into the context of the adjacent residential houses, respecting the level of the eaves and the horizontal alignment of the entrance area. There is no attempt however to imitate the context. The south elevation, in white render, is without windows with the exception of a long narrow opening on the vertical axis from which natural light enters.

On the north side, in absence of a homogenous architectural context, Abraham has built a large prismatic element whose triangular lines form a dialogue on one side with the tower of the nearby church and on the other form symmetrical glazing which continues inside bringing natural light into the adjoining rooms. 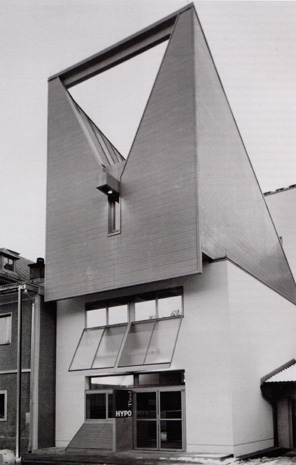 Bank at Lienz, An architectural sculpture in a medieval area (1993-98) Photo: Heinz Grosskopf/Domus

The diversity of the two elevations is part of a game which is developed both in the interiors of the building and in the upper part where instead of a traditional roof there is a sequence of volumes in movement.

The structure which unites and co-ordinates this volumetric landscape is made up of a skeleton in wood which on the north side, clad in zinc, also includes the roof glazing; the south side – where the caretakers house is placed in a raised floor- is clad in concrete with a layer of white render. 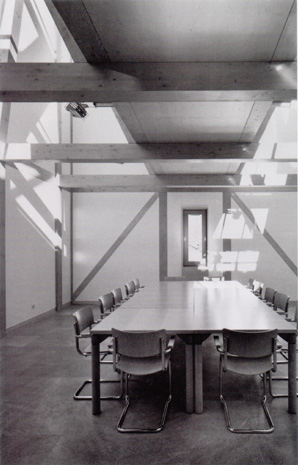 At first glance the inside appears to be low and narrow. Soon, however, the space begins to breathe thanks to openings up above which introduce natural light also from the ground floor. Inside, Abraham creates a correspondence with the volumetric landscape on the roof offering unusual impact with double height spaces, such as in the case of the meeting rooms on the second floor.