The last few days of October saw the opening of an unusual multimedia exhibition of cyberart at Budapest’s Ludwig Museum on Castle Hill. The title of the exhibition, lasting from October 25th until November 25th, is ‘Digitized Bodies‘. Including an appearance by Japanese/Canadian performance artist Atau Tanaka on October 26th, this was a group activity with collaborating artists from Toronto Canada, Budapest Hungary, and Ljubljana Slovenia (the exhibition’s third venue).

The central inspiration was the increasing use in medicine of ‘digitized’ bodies – for example 3D depictions of specific human corpses that can be recorded and manipulated in VRML (virtual reality markup language) so as to enable medical students anywhere in the world to view these 3-dimensional models of human organs. 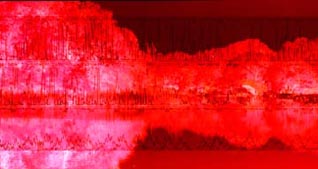 In addition to these exhaustively-scanned human bodies, there are also increasingly remotely-accessed medical surgery where doctors in several continents can collaborate in real-time on one tricky operation, using Internet video feeds and sometimes even Internet-mediated remote control of robotic tools for certain precision tasks of the surgery. 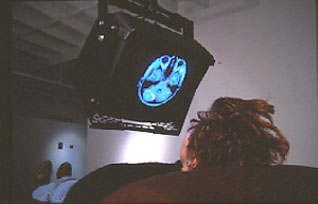