Kulturhuset (“the culture house” when translated) on Sergels torg square in Stockholm was designed by Peter Celsing and opened in 1974. With its central location and the architecture of the square, which is typical of its time, Kulturhuset has come to symbolise Stockholm and the growth of modernism in Sweden. Here are two examples of what you can experience right now at Galleri Gangen, Kulturhuset. 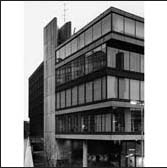 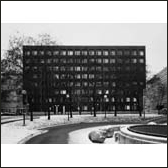 P.C. stands for architect Peter Celsing- one of Swedens most respected architect. His most recognised project being kulturhuset where the exhibition now will take place. Photographer John Hakansson made a jorney through Sweden in search for the language and expressions found in Celsings designs. Different buildings are put in context to surrounding elements to find the differences as well as similarities. 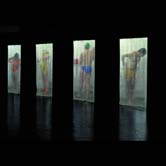 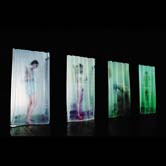 White curtains hangs freely in a dark room with video projections of showering people upon them. The blurry shapes of bodies in full scale together with their sounds are scaringly real. Anna Anders makes the visitor feel like a voyeur for sure. Reactions of happiness, lust and sexuality can easily turn totally around towards horror as in Hitchcock’s “Psycho”!